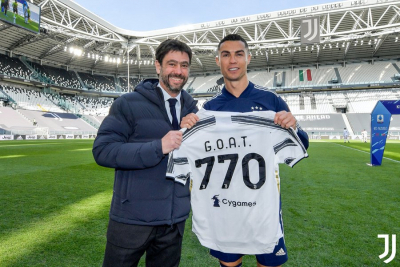 Juventus have told Cristiano Ronaldo they are willing to sell him this summer - but only on their terms.

Portugal forward Ronaldo, 36, still has a year left on his contract.

His future has been the subject of increasing scrutiny and he was left out of the starting line-up for the club's opening Serie A match with Udinese.

It is understood Mendes was summoned to Juventus' training ground earlier on Thursday for a meeting with senior club figures, including vice-president Pavel Nedved, chief executive Maurizio Arrivabene and sporting director Federico Cherubini.

Mendes was told all situations remained possible for Ronaldo, but that Juventus would not sanction the departure of a player they signed for £99.2m three years ago if no transfer fee was involved.

According to Gianluca Di Marzio, Juventus are demanding £21.4million (€25m) for Ronaldo this summer.

And Mendes is attempting to chop that down to a cut-price fee or even a free transfer so City can complete a deal.

He wants to take Ronaldo back to Manchester, but to the Etihad Stadium, which represents the only realistic destination remaining.

Ronaldo is known to be frustrated at how his move to Juventus from Real Madrid has turned out.

Instead of competing for the Champions League, the Italian giants have not made it past the quarter-finals since Ronaldo's arrival and have been beaten in the last 16 for the past two seasons.

Last season, they lost their Serie A title - after winning it for nine years in a row - to Inter Milan and only scraped into the Champions League places in the last couple of games.

More in this category: « Pirates confirm the signing of Olisa Ndah and Kwame Peprah. Manchester City footballer Benjamin Mendy charged with rape. »
back to top