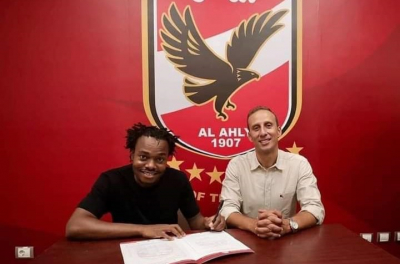 The Red Devils have followed up the signing of Karim Fouad and Luis Miquissone with the capture of South Africa international Percy Tau for an undisclosed fee.

Tau, 27, has been a target for the Reds for a while now after Pitso Mosimane had previously hinted that he will be bringing a player from South Africa to Al Ahly’s ranks.

Speculation of the player being Percy Tau grew increasingly louder when reports emerged of Brighton wanting to cash in on the player after he entered the final year of his contract.

A leaked video of Tau at El-Tetsh all but confirmed the signing, with now the deal being completed after the player put pen-to-paper on his Al Ahly contract.

He will become the second-ever South African to wear the Al Ahly shirt after Phakamani Mahlambi and the third in Egypt overall after Gift Links.

Valued at €3 million, according to Transfermarkt, Tau will become Al Ahly’s most valuable player and will join Ramadan Sobhi as the most valued player in Egypt.

Tau became one of South Africa’s biggest stars under Al Ahly coach Pitso Mosimane at Mamelodi Sundowns, which earned him a move to the Premier League in 2018.

However, Tau never established himself as a member of the Seagulls squad and was subsequently sent on three loan spells in Belgium, where he plied his trade with Union SG, Club Brugge, and Anderlecht.

During his time in Belgium, he was named as the Player of the Season at Union SG after guiding them to promotion to the top tier, before clinching the Belgian Pro League with Club Brugge the following season.

With Brighton, Tau made just six appearances, assisting once in the Premier League while featuring against the likes of Manchester City and Leicester City.

On the international stage, Tau has 30 caps to his name in which he scored 13 goals and was part of the South Africa squad, which knocked out Egypt of the 2019 AFCON.

More in this category: « Kalahari is good for Strydom's soul, and his golf. UEFA Champions League draw: Manchester City draw PSG, Bayern to face Barcelona. »
back to top