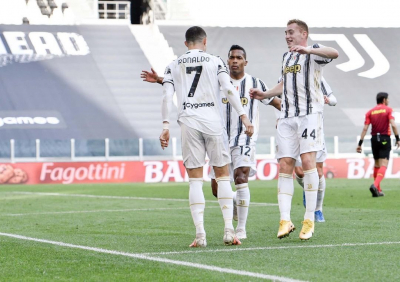 Cristiano Ronaldo said his goodbyes to his Juventus team-mates and missed training on Friday as boss Max Allegri confirmed his imminent exit from the club.

The 36-year-old spent an hour and a half at Juve's Continassa training ground on Friday morning to empty his locker and bid farewell to the squad before they took to the pitch for a training session.

Later on Friday, Allegri confirmed Ronaldo told him he has "no intention" to stay at the club and will not be called up for Saturday's game against Empoli.

"Yesterday, speaking with Cristiano, he told me that he has no intention to stay at Juventus and for this reason, he will not be called up tomorrow [against Empoli] and he didn't train this morning," Allegri said.

"I'm absolutely not disappointed, because Cristiano took his own decision. He was here for three years, he gave his contribution, he put himself at Juventus' disposal, and now he's leaving and life goes on.

"Cristiano did a lot for this club, he's a great champion, I wish him all the luck in the world wherever he will play. He gave a great contribution, for the season that I trained him he led by example for the lads, so he is only to be thanked for what he did for Juventus."

Ronaldo arrived at Turin's Caselle airport around 1.30pm and boarded a private jet to leave Italy, with his future set to be decided in the next few hours.

Manchester City are in talks to sign the 36-year-old.

Ronaldo is in the final year of his contract in Turin and the Italian giants are asking any suitor to pay a €25m (£21.3m) transfer fee, which could be a major stumbling block along with his £500,000-per-week wages at the Allianz Stadium.

Juventus are yet to receive an official bid for Ronaldo. There is still some way to go before a deal can be concluded and time is tight to complete a deal before Tuesday's transfer window deadline.

Sky in Italy are reporting City are willing to offer Ronaldo a two-year contract, with a salary of £12.8m-per-season (€15m).

Ronaldo joined Juventus from Real Madrid in 2018 for a fee in the region of £105m and he has scored 101 goals in 134 games for the club, helping them to two Serie A titles, one Coppa Italia crown and two Italian Super Cups.

Juventus, who want to sell Ronaldo before his contract expires next summer, are in advanced talks to sign Moise Kean from Everton, who scored 17 goals in 41 games while on loan at Paris-Saint Germain last season.

More in this category: « Europa League draw: Leicester City with Napoli while Rangers get Lyon. Robert Lewandowski looks to score in his 13th consecutive fixture. »
back to top