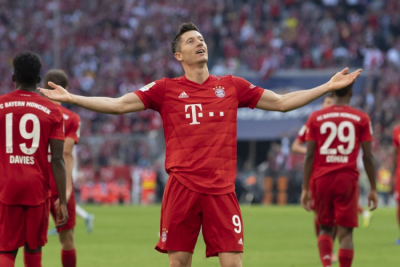 Robert Lewandowski is out to score in a 13th consecutive Bundesliga match when FC Bayern München host Hertha Berlin on Matchday 3 of the 2021/22 campaign, with title hopefuls Borussia Dortmund welcoming TSG Hoffenheim to the Signal Iduna Park and RB Leipzig making the trip to VfL Wolfsburg in two eye-catching encounters.

Bayern's record-breaking Pole found the back of the net for a 12th successive top-flight game as Bayern held off a spirited 1. FC Köln fightback to chalk up their first league win of the season on Matchday 2.

Serge Gnabry was at the double in that victory and Julian Nagelsmann's side will be out to build on those three points on Saturday evening against a Hertha side that have lost each of their opening two fixtures.

As for Dortmund, Marco Rose's men will need to pick themselves up from last weekend's loss at SC Freiburg and will be looking at the likes of Erling Haaland and Gio Reyna to get them back to winning ways when TSG Hoffenheim come to town on in Friday night's opening fixture of Matchday 3.

Having thumped FC Augsburg on week one, Hoffenheim shared an entertaining 2-2 draw with 1. FC Union Berlin in their last outing. That leaves TSG sitting pretty in second place as red-hot former Dortmund man Jacob Bruun Larsen goes in search of scoring for a third game on the bounce against the team he represented 41 times before joining Hoffenheim in January 2020.

While that kicks off the weekend's action in style, Wolfsburg and Leipzig close out the third round of the 2021/22 season on Sunday in another mouth-watering Matchday 3 meeting.

The Wolves came from behind to win at Hertha last time out, with Lukas Nmecha the late hero as Mark van Bommel's side maintained the division's only remaining perfect record and moved top of the table.

Out to dislodge Wolfsburg from top spot are Leipzig, who will be full of confidence after their 4-0 win over VfB Stuttgart.

Dominik Szoboszlai was the star of the show in that victory, marking his full Bundesliga debut with a brace. Summer signing Andre Silva - who scored 28 times in Germany's toptier for Eintracht Frankfurt last season - was also on the scoresheet for the first time as a Leipzig player and is likely to take some stopping now that he's up and running.

Elsewhere on Matchday 3, Stuttgart look to get back on track at home to Freiburg on Saturday afternoon. At the same time, SpVgg Greuther Fürth make the trip to 1. FSV Mainz 05, Augsburg are at home to Bayer 04 Leverkusen, Arminia Bielefeld entertain Frankfurt, and VfL Bochum 1848 travel to Cologne.

The remaining game of the weekend takes place on Sunday, with Union Berlin welcoming Borussia Mönchengladbach to the An der Alten Försterei, where both teams will be out to earn first wins of the season.

Meanwhile, on Matchday 5 of Bundesliga 2, FC Schalke 04 take on Fortuna Düsseldorf in a match that was a Bundesliga fixture as recently as the 2019/20 edition.

League leaders SSV Jahn Regensburg are away to FC St. Pauli and SV Werder Bremen host F.C. Hansa Rostock, with both of those games taking place on Sunday. So too does the game between second place Dynamo Dresden and third place SC Paderborn 07 that completes a cracking trio of matches.