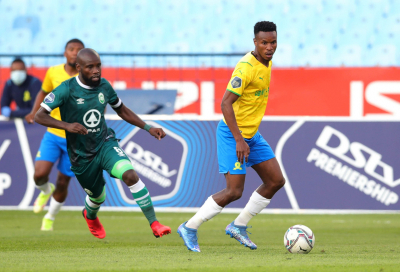 Lamontville Golden Arrows will lock horns with Mamelodi Sundowns in the 2021 MTN8 semifinal first-leg match at the Sugar Ray Xulu Stadium on Saturday.

Arrows booked their place in this stage of the tournament after defeating three-time champions SuperSport United 4-3 on penalties following a 2-2 draw in the quarterfinal match two weeks ago.

The KwaZulu-Natal side is back in the MTN8 semifinals for the first time since 2009 when they won the competition and they are now determined to go all the way and clinch the trophy for the second time.

Lehlohonolo Seema, the Arrows head coach, has warned that his charges will give a good account of themselves against Sundowns after Abafana Bes'thende succumbed to a 3-1 defeat to SuperSport in the DStv Premiership match in midweek.

"The mood was down in the camp. The players were broken after losing the league game. We have to pick them up and motivate them to do well in the cup match," Seema said.

"We are excited to be in the semifinals. We are improving each game. We will recover [from the league defeat] and see who is available to play in the game. We got to this stage of the competition because we work hard.

"We want to give a good account of ourselves and see what will happen."

Meanwhile, Sundowns sneaked into the semifinals after defeating record 15-time Top 8 champions Kaizer Chiefs 2-1 on penalties following a 2-2 draw in the quarterfinal match a fortnight ago.

Sundowns will be taking part in the MTN8 semifinals for the first time since 2019 having won the competition three times, but the last time they clinched the trophy was in 2007 when it was still known as the SAA Supa 8 Cup.

Rhulani Mokwena, the Sundowns co-head coach, has stated that Arrows are very unpredictable and this makes it more difficult when preparing for their first-leg encounter against Abafana Bes'thende.

"We are people of process and we are serious people that are really focused this season," Mokwena said.

"They have a very Arrows way of playing and I think it's synonymous with how they are known as Abafana Bes'thende. They play with a bit more exuberance.

"They play a little of CAF football, and even when they try to have some form of organisation, they still try to maintain a little of flair and the expressive abilities of their players"

Elsewhere Cape Town City side will go head to head with Swallows FC in the 2021 MTN8 semifinal first-leg match at the Athlone Stadium on Sunday.

City secured their place in this round of the competition after claiming a 2-1 victory over AmaZulu FC in an entertaining quarterfinal match a fortnight ago.

Eric Tinkler, the City head coach, lauded his charges for showing determination in their midweek win over Royal AM in the DStv Premiership match and he believes that he can guide his side to the MTN8 final.

"They needed to show a lot of bravery, a lot of guts, a lot of determination and they gave me everything they had," Tinkler said.

"Everybody that came in, we made the full complement of substitutions, and everybody provided and the team collects the three points.

"We will go into the game with more self-belief and confidence. We have to work hard to book our place in the cup final."

Swallows progressed to the semifinals after defeating their Soweto rivals, Orlando Pirates 2-1 in a tightly contested quarterfinal match two weeks ago.

won the MTN8 title in their previous appearance in the tournament in 2012 and the three-time Top 8 champions have also had a good start to the current season - winning two matches and drawing one.

Brandon Truter, the Swallows head coach, expects a tough game against City and he stressed the importance of keeping a clean sheet in Cape Town.

"It is not easy against City, this season they have already scored a number of times, and last season they were one of the highest scorers," Truter said.

"But we will be mindful of that … and hoping to snatch it [the tie]. They do concede, as we saw against Royal AM … there is enough evidence to say we will create chances.

"Having the away leg first is tough, you don’t want to concede so you can come home with a clean slate."

More in this category: « Stubborn India fight back against England as Pujara ends day three on an unbeaten 91. India collapse again as England seal crushing win in third Test. »
back to top