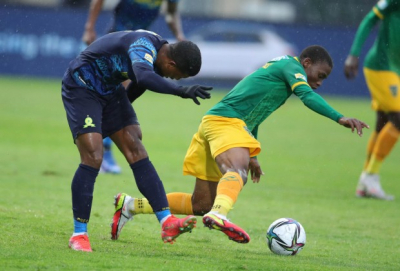 Mamelodi Sundowns had to dig deep to secure a 1-1 draw against Lamontville Golden Arrows in the MTN8 semi-final first-leg match on Saturday afternoon.

Nqobeko Dlamini handed Abafana Bes'thende an early lead, but a second-half strike from Pavol Safranko ensured that the rain-soaked encounter ended in a draw at Sugar Ray Xulu Stadium.

Michael Gumede led the attack for Abafana Bes'thende, while Dlamini and Velemseni Ndwandwe operated as two holding midfielders and the impressive Nkosinathi Sibisi marshalled the defence.

On the other hand, Masandawana recalled Andile Jali, Gaston Sirino, and Kermit Erasmus to the starting line-up with Themba Zwane and Mothobi Mvala out injured.

Arrows kept pressing Sundowns early on and won the ball back outside the Downs box before the ball fell for Saziso Magawana but he rushed his effort and it went off target.

The visitors lost possession in midfield and Dlamini dribbled past two markers, before unleashing a powerful low shot which beat goalkeeper Denis Onyango hands down to hand Arrows a 1-0 lead.

Downs had a decent chance when Peter Shalulile won a free-kick. Lyle Lakay took the kick but Sifiso Mlungwana was able to punch it away.

No further chances followed at either end of the pitch in the first-half with Arrows completely nullifying the Sundowns attack on a wet afternoon in KwaZulul-Natal.

The visitors won a corner shortly after the half-time break. Sirino took it from the the ball was flicked on towards goal by Rivaldo Coetzee with Velemseni Ndwandwe having make a goal-line save.

Nkosinathi Sibisi then fouled Sirino from behind and a free-kick was awarded. Lakay went for goal once again and Mlungwana chose to punch the wet ball away.

Shortly before the hour mark, Lakay fired in a corner from the right and Grant Kekana put an effort over the crossbar from about two-yards out.

Mlungwana continued to frustrate the reigning PSL champions as he produced a fantastic finger-tipping save from Sirino's curling corner-kick, before blocking Erasmus' goal-bound shot from inside the box.

However, Mlungwana was finally beaten in the 85th minute when he failed to hold on to a low cross from Thapelo Morena and Safranko was there to poke the ball home from close range to make it 1-1, the Slovak's maiden goal for Sundowns.

The late goal ensured that the match ended in a 1-1 draw with the second leg scheduled to be played on September 28 in Pretoria.

More in this category: « Man City shrug off Kane, Ronaldo snubs to humiliate Arsenal. Hot Alex Haindl on fire in freezing Sishen. »
back to top