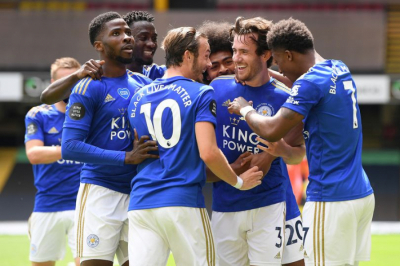 The Canaries fell behind early on after Jamie Vardy took advantage of a mistake by on-loan Manchester United defender Brandon Williams.

The hosts levelled through Teemu Pukki's penalty just before the break but Albrighton's shot, which deflected off Williams, restored Leicester's lead.

McLean looked to have equalised soon after, but Todd Cantwell was ruled offside to leave Norwich one place above Arsenal at the foot of the Premier League.

Norwich were celebrating their second equaliser, a powerful header from the recalled McLean, but were denied their moment when a VAR check revealed Cantwell was offside in front of Leicester goalkeeper Kasper Schmeichel.

Arsenal's 5-0 defeat at Manchester City earlier on, coupled with Pukki's goal - Norwich's first of the league season - moved the Canaries off the bottom of the table after three games.

The Hammers were on course to make it three wins out of three when Spaniard Pablo Fornals scored in the 39th minute after playing a slick one-two with forward Michail Antonio.

But Palace were much better after half-time and levelled when midfielder Gallagher,who is on a season long loan from Chelsea found the target.

In-form Antonio thought he had won it when he rifled past Vicente Guaita for his fourth goal of the campaign - and his 50th in the Premier League.

However, Gallagher's clever turn and finish - after James McArthur's pass - earned battling Palace their second point of the season.

Elsewhere James Ward-Prowse scored a dramatic 96th-minute penalty soon after Allan Saint-Maximin appeared to grab an injury-time winner for Newcastle as Southampton earned a point in a thrilling encounter at St James' Park.

More in this category: « Hot Alex Haindl on fire in freezing Sishen. Verstappen pips Russell to pole at rain-soaked Belgian Grand Prix. »
back to top