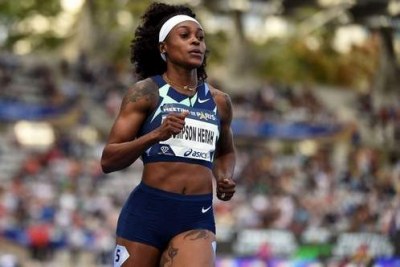 Jamaica's Thompson-Herah was hoping to challenge the 33-year-old mark after running the second fastest 100m of all time last weekend in 10.54.

"The world record is a short-term goal," said Thompson-Herah.

"I am a double Olympic champion, I'm delighted with my performance," said Thompson-Herah, who won the 100m/200m double in Tokyo after doing the same at the Rio Games in 2016.

"I have never been this fast. I'm very happy with what I've accomplished in 2021."

She also clocked 10.64 in Lausanne on Thursday behind fellow Jamaican Shelly-Ann Fraser-Pryce's time of 10.60 - the third fastest time of all time. Fraser-Pryce did not compete in Paris because of fatigue.

Asher-Smith, back in action after the hamstring injury that ended her Olympics, clocked 11.06 in third, while fellow Briton Daryll Neita, who made the Olympic final in Tokyo, ran 11.12.

Morocco's Olympic 3,000m steeplechase champion Soufiane El Bakkali - the first non-Kenyan since 1980 to win Olympic gold in the event - fell at the first hurdle and needed treatment trackside. Benjamin Kigen won the race with a world-leading time of 8:07.12.