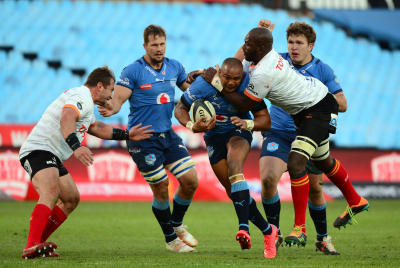 The Vodacom Bulls confirmed their position at the top of the Carling Currie Cup log when they pipped the Toyota Cheetahs 39-36 in a 10-try thriller at Loftus Versveld in Pretoria on Saturday.

This means that if they win their home semifinal, they will host the final for the second successive year following their tight win over the Cell C Sharks last season.

Bulls opened the scoring through Marco Jansen van Vuren’s try just after four minutes, which was excellently set up by outside centre Lionel Mapoe.

However, the Cheetahs quickly found their stride and landed a double blow of their own as No 8 Mihlali Mosi ran an excellent line to score, before two other products of the Varsity Cup, Cohen Jasper and Duncan Saal, combined for the visitors’ second try.

Keeping in character, the Bulls turned to the power of their pack, which allowed Elrigh Louw to force his way over from a dominant scrum, and then Jan-Hendrik Wessels fell over the line from a driving maul.

The Cheetahs did lose Reinhard Fortuin to an injury in the first half, resulting in Ruan Pienaar having to revert to flyhalf. Pienaar and Johan Goosen then exchanged penalties to see the game go into the break deadlocked at 24-24.

It took just eight minutes into the second half for Wessels to get his second try from another powerful driving maul. Replacement scrumhalf Keagan Johannes made a terrific impact as he sped the game up and found Madosh Tambwe with a wonderfully weighted pass to put the wing in, as the Bulls extended their lead to 15 points.

The Cheetahs made a late attempt at a comeback as Jasper crossed for a try before he sent Malcolm Jaer over in the corner to make it a three-point game in the final five minutes.

Meanwhile Western Province scored two late tries to secure an enthralling 35-24 bonus-point win over the Sharks to advance to the semi-finals of the Currie Cup.

After all their struggles, WP needed a big performance and they delivered one, even though it looked at times as if they’d come up short.

Ultimately, a late flurry of tries – by JJ Kotze and Edwill van der Merwe – in the dying stages of an evenly contested match earned them a 35-24 win, just about enough to get them over the line and into the semi-finals at the expense of the Pumas, who agonisingly miss out on a playoff spot.

But the question now remains if they can do it two weeks in a row, with the formidable table-topping defending champion Bulls waiting for them at Loftus Versfeld.

More in this category: « Thompson-Herah wins Paris Diamond League with meet record time of 10.72sec. Messi set for PSG debut as Mbappe named in squad despite transfer talk. »
back to top