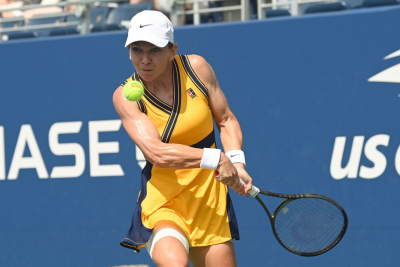 Former world number one Simona Halep made a winning return to Grand Slam tennis after injury with a straight-set win over Camila Giorgi at the US Open.

Giorgi, ranked 36th in the world and winner of the Canadian Open this month, was a challenging prospect for Halep in the first round at a major.

But the two-time Grand Slam winner made the most of Giorgi's errors to advance.

The Italian made 30 unforced errors, nearly twice as many as Halep, as the Romanian 12th seed booked a second-round meeting with Slovakia's Kristina Kucova.

Among the women's top seeds in action later on day one at Flushing Meadows are Naomi Osaka, Aryna Sabalenka and Elina Svitolina.

Meanwhile British number one Johanna Konta has pulled out of the US Open, just hours before she was set to play her opening match on Monday.

The reason for Konta's late withdrawal was unclear.

Raducanu, 18, is aiming to back up her Wimbledon exploits - where she reached the last 16 as a wildcard - after coming through qualifying in New York.

After initially being set to play American Brady on Arthur Ashe Stadium, Raducanu now faces Vogele on court 17 at around 19:00 BST on Tuesday.

More in this category: « Chelsea midfielder Tiemoue Bakayoko joins AC Milan on loan until 2023. Osaka secures first-round win in return to U.S. Open while Murray loses to Tsitsipas. »
back to top