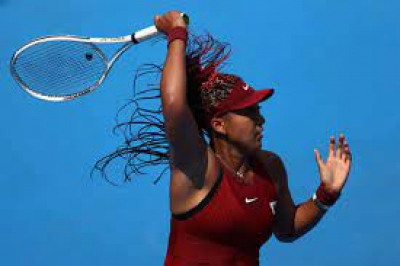 Defending champion Naomi Osaka claimed a straight-set victory at the US Open on her first Grand Slam appearance since withdrawing from the French Open.

She will play world number 145 Olga Danilovic of Serbia next.

Osaka withdrew from Roland Garros in May, revealing she had "suffered long bouts of depression" since winning her first major title at the 2018 US Open.

The four-time major champion decided not to play at Wimbledon in June but returned for the Tokyo Olympics, where she lost in the third round.

Bouzkova showed impressive early resistance in New York, but Osaka eventually got a break at 5-4 up to seal the first set.

The 2021 Australian Open winner came into the tournament having won only three matches in the past three months but looked to have recovered her form as she overpowered and outmanoeuvred her opponent in the second set.

After her win, Osaka said she felt "really comfortable" playing on Arthur Ashe Stadium again, adding it was "kind of crazy" to play in front of fans after the tournament was held behind closed doors in 2020 because of the coronavirus pandemic.

"Last year when we didn't have a crowd I know it felt quite lonely for me," she said.

"I'm just really glad to see little kids in the audience and of course grown-ups too. To be playing the first night match is something I've never done before so I'm just glad I won."

Osaka celebrated her win by running over to a young fan and sharing a souvenir to remember her visit to Flushing Meadows.

"I heard her and she was so cute," she explained.

"Thank you for cheering me on. In the Olympics we got little pins that we were supposed to pass around to other players.

"I wasn't there for a long time so I have a couple in my bag left over. I thought it would be a nice memory."

Meanwhile second seed Daniil Medvedev eased to a straight-set victory over Frenchman Richard Gasquet to reach the US Open second round.

World number two Medvedev has never won a Grand Slam, having lost the 2019 US Open final and this year's Australian Open final.

The British former world number one played in a manner reminiscent of his best as he led by two sets to one.

Dan Evans is the only Briton through after defeats for Heather Watson, Harriet Dart and Cameron Norrie.

More in this category: « Simona Halep beats Camila Giorgi to reach round two of US Open. Dale Steyn announces retirement from all cricket:'Bittersweet, but grateful'. »
back to top