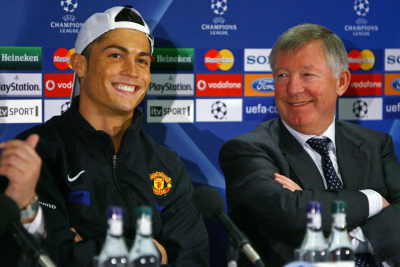 Cristiano Ronaldo says he is "back where I belong" at Manchester United and has dedicated his return to the club to former boss Sir Alex Ferguson.

United have paid an initial 15m euros (£12.85m) to sign the 36-year-old from Juventus, a decade after he left the club to join Real Madrid.

He has signed a two-year contract, with the option to extend for another year.

"Everyone who knows me, knows about my never ending love for Manchester United," he wrote on Instagram.

"The years I spent in this club were absolutely amazing and the path we've made together is written in gold letters in the history of this great and amazing institution."I can't even start to explain my feelings right now, as I see my return to Old Trafford announced worldwide.

"It's like a dream come true, after all the times that I went back to play against Manchester United, and even as an opponent, to have always felt such love and respect from the supporters in the stands.

"This is absolutely 100% the stuff that dreams are made of!"

Five-time Ballon d'Or winner Ronaldo signed off: "I'm right here! I'm back where I belong! Let's make it happen once again! PS - Sir Alex, this one is for you…"

Sir Alex Ferguson was United manager during Ronaldo's first spell at Old Trafford, when he scored 118 goals in 292 appearances before leaving for Real Madrid in 2009.

He is believed to have spoken to Ferguson prior to his return to United, which could also cost the club a possible 8m euros (£6.85m) in add-ons.

Current Red Devils boss Ole Gunnar Solskjaer said: "You run out of words to describe Cristiano. He is not only a marvellous player, but also a great human being.

"To have the desire and the ability to play at the top level for such a long period requires a very special person.

"I have no doubt that he will continue to impress us all and his experience will be so vital for the younger players in the squad.

"Ronaldo's return demonstrates the unique appeal of this club and I am absolutely delighted he is coming home to where it all started."

Ronaldo had been linked with Manchester City but opted to return to United, where he spent six years and won three Premier League titles, one Champions League, two League Cups and one FA Cup - as well as the Fifa Club World Cup and Community Shield.

More in this category: « Dale Steyn announces retirement from all cricket:'Bittersweet, but grateful'. Leeds sign winger James from Manchester United on permanent deal. »
back to top