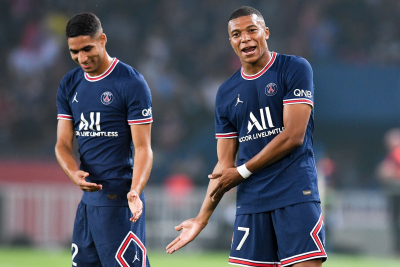 Paris St-Germain managed to keep Kylian Mbappe despite strong interest from Real Madrid, but face losing the France striker for nothing next summer.

Mbappe, 22, was the subject of a 160m euros bid from Real last week,but PSG sporting director Leonardo said it was "not sufficient".

Mbappe, out of contract in June 2022, is free to sign a pre-contract agreement with another club in January.

"Sources at PSG said reports Real made another bid on Tuesday were not true.

"Even though Mbappe is known to hanker after a move to the Bernabeu, and even though his contract runs out in less than 12 months' time, his club said no.

"Financially, the decision makes no sense. But from a footballing perspective - for a club who have signed Lionel Messi and Sergio Ramos, among others, this summer in a determined effort to win the Champions League - it was the right move."

Mbappe has reportedly rejected a mammoth, record-breaking contract from PSG that would have seen him become the highest-paid player in the world.

The World Cup winner was desperate to leave PSG for Real in the transfer window but a move never materialised.

World Cup winner Mbappe scored twice in PSG's win at Reims in Ligue 1 on Sunday, a game that saw Messi make his debut for the Parisian side.

After the game, PSG boss Mauricio Pochettino said Mbappe was "one of the most important players in the world today" adding " for him to be with us is a gift".

He said that PSG had made "two big offers" to keep Mbappe at the club and had seen the Frenchman as "the centre of the project" at the club.

Mbappe has scored 135 goals in 175 games for PSG and has won three Ligue 1 titles and three French Cups, as well as helping the club reach the Champions League final for the first time.

More in this category: « Djokovic survives scare to keep calendar slam bid on track at US Open. ProItUp locks on as Sunshine Tour rangefinder partner. »
back to top