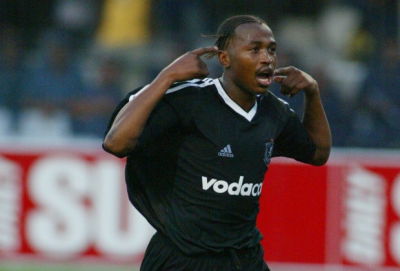 The late Lesley Phuti Manyathela will be remembered on Saturday with a celebration to commemorate what would have been a landmark birthday.

Manyathela would have turned 40 on Saturday, September 4 and this special day to be honoured with the establishment of the Lesley Manyathela Foundation.

The former Orlando Pirates striker died in a car accident at the young age of 21, on August 8, 2003. Just hours after scoring a consolation goal for Pirates against Jomo Cosmos in the SAA Supa8 at Rand Stadium.

At the time the prolific goalscorer had a move to Dynamo Kiev lined up after scoring 21 goals in the 2002/03 season to fire Orlando Pirates to the league.

"Slow Poison as Manyathela was affectionately known remains an outstanding figure in South African sports history, particularly in the football fraternity. His indisputable exploits in front of goal captivated the minds of many and had thousands pinning their hopes on him. Lesley’s untimely passing remains a painful episode in the hearts of the Orlando Pirates faithful and the broader football community.

"The PSL top scorer award is named the Lesley Manyathela Golden Boot as a special tribute to the late forward. The establishment of the LMF coincides with what would have been Manyathela’s 40th birthday. It is for this reason that the Foundation has been established in his honour and memory. The LMF is in pursuit of preserving the legacy of Lesley Phuti Manyathela through community-based programmes that are aimed at helping youth in sport realise their dreams and reach their fullest potential.

In his remembrance, a ceremony under Covid 19 protocols will be held at Lesley’s hometown in Musina this weekend. The event will also be marked by an important announcement by the Foundation," details the press statement attributed to Gladys Manyathela, the chairperson of the LMF, who is the mother to the late footballer.

Manyathela scored 40 goals in 62 starts, all of which were achieved before he turned 22 by which time, he had been capped at Bafana Bafana level, Under-23 and Amajita.

More in this category: « ProItUp locks on as Sunshine Tour rangefinder partner. Phete and Kutumela ruled out of crucial 2022 FIFA World Cup qualifier. »
back to top