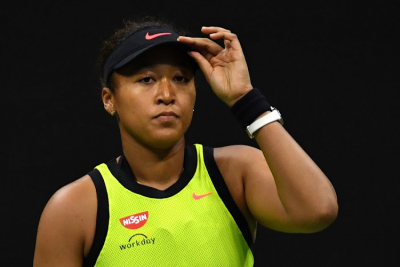 Naomi Osaka says she will take another break from tennis after her US Open title defence ended in the third round.

Osaka withdrew from this year's French Open after revealing she has struggled with her mental health since first becoming a Grand Slam champion in 2018.

The 23-year-old also missed Wimbledon before returning to the sport at the Tokyo Olympics, where she lit the flame at the opening ceremony.

"I feel like I'm kind of at this point where I'm trying to figure out what I want to do," Osaka said in a post-match news conference, in which she became increasingly tearful.

"I honestly don't know when I'm going to play my next tennis match. I think I'm going to take a break from playing for a while.

"I feel like for me recently, when I win I don't feel happy. I feel more like a relief. And then when I lose, I feel very sad. I don't think that's normal."

Osaka was on course for a straight-sets victory when she broke Fernandez's serve for a 6-5 second set lead.

But a string of forehand errors cost her her serve and the ensuing tiebreak, during which she uncharacteristically threw her racquet on the floor.

"I'm really sorry about that," she said later.

"I'm not really sure why. Normally I feel like I like challenges. But recently I feel very anxious when things don't go my way, and I feel like you can feel that. I was kind of like a little kid."

Osaka is the first woman in the top 20 to have lost a match at this year's US Open.

Fernandez, who turns 19 on Monday, will now face the 2016 champion Angelique Kerber for a place in the quarter-finals.

More in this category: « Ollie Pope leads the fightback to put England on top after early collapse. Alcaraz stuns third seed Tsitsipas to earn historic win at US Open. »
back to top