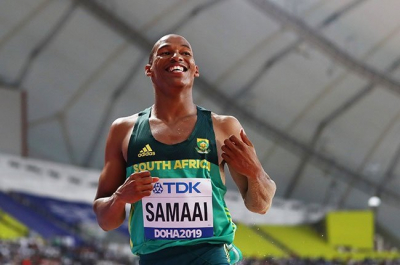 Samaai landed at 7.95m, just four centimetres short of American athlete Steffin McCarter, who took the win with a 7.99m jump. Filippo Randazzo of Italy finished third with a leap of 7.89m in the final three eliminator.

In the women's 5 000m race, Dominique Scott-Efurd settled for 15th position in her season's best of 15:01.66. Former 800m specialist Francine Niyonsaba grabbed the win in 14:25.34, setting a national record for Burundi.

"We congratulate Ruswahl for his podium finish. He managed to shake off the disappointments of the Tokyo Olympics and rose to take on his new challenge at the Diamond League. Congratulations to him, his coach and his support staff for the hard work.

"We trust that all our athletes who are invited to participate in the last leg of the series will again give it their all in their respective events so that they can have a happy ending," said James Moloi, the President of Athletics South Africa.

The final leg of the 2021 Diamond League series will be held in Zurich, Switzerland between 8-9 September.

More in this category: « Kimi Räikkönen ruled out of F1 Dutch GP after testing positive for Covid-19. Former world champion Oscar De La Hoya hospitalised with Covid-19. »
back to top