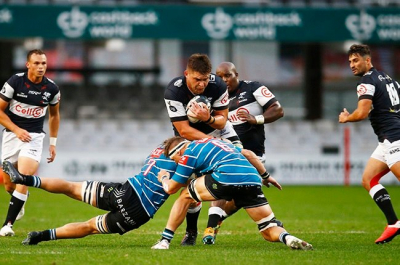 Tafel Lager Griquas scored a late try to cause a few nervous flutters among Cell C Sharks supporters but in the end the Durbanites held on for a 28-24 semifinal win that sets up a second successive Carling Currie Cup final between them and the Vodacom Bulls in Pretoria.

A brace of tries from hooker Kerron van Vuuren – both from driving mauls – to go with a try from centre Marius Louw gave the Sharks victory at Kings Park.

While the Sharks maintained relative control of the scoreboard, the quality of their play will have to drastically improve if they are to dethrone the defending champions next weekend.

The Sharks started with good momentum and opened the scoring through an early Curwin Bosch penalty. Whitehead missed his first penalty attempt, but made no mistake with his second to level the score at 3-3 after 14 minutes.

Despite the bright start, it was a very error-prone performance from the Sharks. Whitehead punished them for some silly penalties to give the visitors a 9-3 lead. But the Sharks then turned to their driving maul, which paid dividends as it won them a couple of penalties, before Kerror van Vuren was able to score the opening try.

Griquas had an opportunity to hit straight back from an excellent counter-attack, but butchered a two-on-one opportunity, before Ashlon Davids’ score was ruled out due to an earlier knock-on.

Louw scored the Sharks’ second try after a strong run from a maul, breaking the line and diving in under the poles to give them an eight-point lead at the break.

Griquas put up a good fight in the first half, but some soft moments in defence meant that they trailed by eight points at the break. The Sharks had some nice touches in midfield, but were quite error-prone and gave away some soft penalties.

The two kickers traded penalties at the start of the second half, before Adre Smith buried his way over to bring Griquas to within four points of the lead.

Griquas’ attempts to get back into the match suffered a double blow when flank Hanru Sirgel was forced off with an arm injury, before Van Vuuren grabbed his second try from another strong Sharks maul. To compound the visitors’ injury woes, Eduan Keyter then had to be helped off the field.

The Sharks faced a late onslaught on their tryline and lost Louw to a yellow card, with Griquas giving themselves hope of stealing a win when Alandre van Rooyen scored from a driving maul, making it a four-point game with two minutes to go.

However, Griquas were trapped in their own 22 from the kick-off and in their attempts to muster a linebreak, lost the ball forward, allowing the Sharks to secure the win.

Meanwhile The Vodacom Bulls juggernaut continued its dominant march, smashing its way into the Carling Currie Cup final with a 48-31 win over DHL Western Province at Loftus Versfeld on Friday night.