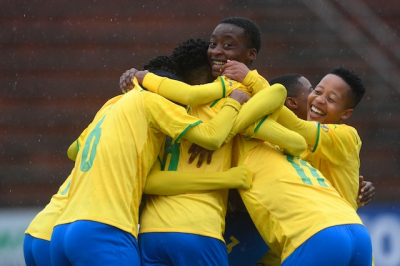 South Africa’s Mamelodi Sundowns have been crowned the inaugural winners of the 2021 TotalEnergies CAF Women’s Champions League | COSAFA Qualifiers with a 3-0 victory over Black Rhinos Queens of Zimbabwe in the final in Durban on Saturday.

The jubilant Sundowns side not only claim bragging rights in the region and a trophy, but also book their ticket to the TotalEnergies CAF Women’s Champions League that is scheduled for Egypt later in the year.

They scored 22 goals in their five games, and conceded just once, showing their dominance in the competition, and earning the title of worthy winners.

The match was watched by Confederation of African Football (CAF) President Dr Patrice Motsepe, who is a former owner of the Sundowns club, as well as a delegation from FIFA that included Secretary General Fatma Samoura and Chief Women’s Football Officer Sarai Bareman.

Sundowns took the lead on 12 minutes as their pressure at the start of the game paid dividends. Melinda Kgadiete forced the error, and the ball broke to Andisiwe Mgcoyi, who laid on a square pass for Lerato Kgasago to side-foot into the net.

The closest that Queens came in the first half was a shot on the turn from veteran forward Rutendo Makore that sailed just over the crossbar.

Queens came out firing in the second period, but that meant they were leaving more space at the back and Sundowns almost profited when Kgadiete found space on the edge of the box, but her powerful shot was just too high.

Mgcoyi should have added a second when she met a cross at the near post, but her header missed the target, while Makore had another effort that was straight at Sundowns goalkeeper Phillistus Rabalao.

profited from hesitancy at the back from Queens and she dispossessed goalkeeper Precious Mudyiwa to score into an empty net.

The cherry on top came with a third goal late on as Lesotho international Boitumelo Rabale fired into the top corner after skipping past one defender and unleashing an excellent strike to finish the competition.

The Player of the Tournament award was won by Makore, with the Golden Glove for best goalkeeper going to Mudyiwa. Sundowns’ Kgadiete won the Golden Boot for her five goals in the tournament.

The reigning South African Hollywoodbets Super League champions finished the qualifiers undefeated during the COSAFA tournament and will be heading to Cairo, the Egyptian capital for the continental championships, brimming with confidence to become the first African women club champions.

"I would like to congratulate Mamelodi Sundowns Ladies for once again hoisting the South African flag high during the CAF Women’s Champions League COSAFA Region qualifiers. They made a statement of intent," said SAFA President, Dr Danny Jordaan.

"Now they need to go all the way in the continental championships and become the first women club on the continent to be crowned African champions. They showed their potential during the COSAFA qualifiers and at this rate, only the sky can be the limit to what they can achieve," he added.

Mamelodi Sundowns Ladies won the inaugural Women’s National League now known as Hollywoodbets Super League and are currently top of the log standings with an unbeaten record and are favourites to retain their domestic title.

More in this category: « All Blacks complete a Bledisloe Cup whitewash of Australia. Max Verstappen wins home race to leapfrog Lewis Hamilton in championship. »
back to top