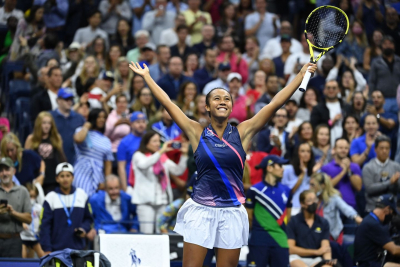 Teenager Leylah Fernandez produced another fearless performance to beat Elina Svitolina and set up a US Open semi-final with Aryna Sabalenka.

Svitolina, 26, had overturned a 5-2 deficit in the third but could not stop Fernandez's thrilling, powerful play.

She has shown remarkable composure in New York, backing up her easy power with a calmness and composure on court.

As Svitolina sent a return of serve long on match point, Fernandez fell to her knees and teared up as she was given a lengthy ovation by the fans on Arthur Ashe.

"I honestly have no idea what I'm feeling right now. I was so nervous throughout the whole match," she said.

"I was honoured to have a fight with Svitolina. I just told myself to go for every point. I'm glad I did."

Fernandez is the youngest women to reach the US Open singles semi-finals since Maria Sharapova in 2005, getting there a day after her 19th birthday.

The teenagers have made a breakthrough in this year's US Open, with 18-year-olds Emma Raducanu and Carlos Alvaraz also reaching the fourth round along with Fernandez.

Fernandez has shown them that going one further, no matter the opponent, is possible. She has done it by trusting in her game and her big-hitting weapons, finishing with 42 winners against Svitolina.

Her father, who coaches her, is an ex-professional footballer. As a child, Fernandez says she believed she could beat him in games of backyard football - and it is that self-confidence that has backed up her performances in New York.

She credited her dad, who is at home with her young sister, with giving her tactical support. Her lively support box is led by her fitness coach Duglas Cordero who constantly asked them to make more noise.

"My dad told me so many things but today he told me to have fun," she said.

"He said fight for every point and to not make the quarter-finals my last match and fight for my dream."

Fernandez will now face Sabalenka, who is the highest seed remaining in the women's draw and has dominated her draw.