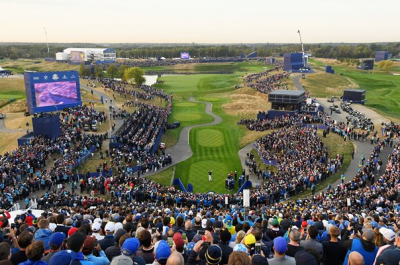 The United States Ryder Cup team will have six rookies after captain Steve Stricker selected four debutants among his picks to face Europe in September.

Stricker is comfortable with half of his team set to make their Ryder Cup debuts in the 43rd staging of the biennial event at Pete Dye-designed at Whistling Straits in Wisconsin from 24-26 September.

"US rookies have a 40-29-17 [wins-losses-halved] record so they do well in this format," he said. "And some have experience of playing in the Presidents Cup so they are not rookies in team events."

The US last featured six rookies in a team at the 2008 Ryder Cup, where they ended a run of three defeats with a 16½-11½ victory at Valhalla.

Europe have won nine of the past 12 Ryder Cups and are the defending champions after winning 17½-10½ at Golf National in Paris in 2018.

Stricker said that leaving Patrick Reed out of his team was "a difficult call". Reed, who played at last week's season-ending Tour Championship, has been recovering from a bout of double pneumonia, which he said could have proved fatal.

The American has won eight points from three previous appearances and Stricker added: "He's a tremendous competitor and his record at the Ryder Cup is pretty good, but it was the uncertainty over his health and lack of play."

Stricker also said that he had talked with his vice-captains about the injury situation surrounding Koepka.

The four-time major winner withdrew from the Tour Championship during round three after hitting a tree root and injuring his wrist.

"We've talked about if we have to replace him but we're not there yet," said Stricker. "We'll deal with that situation if that were to happen but we're moving forward with these 12 guys."

Originally, the US team was going to be made up of the top eight players on the points list and four wildcard picks but that was revised to six and six following the postponement of the event last year because of the Covid-19 pandemic.

The European team, captained by Padraig Harrington, will be confirmed on Sunday, 12 September at the conclusion of the European Tour's BMW Championship at Wentworth.

Harrington will have three picks, with nine players qualifying through the European and world points lists.

More in this category: « Eight Brazil players stopped from playing for their clubs this weekend. Carlos Queiroz named as Egypt national football team’s head coach. »
back to top