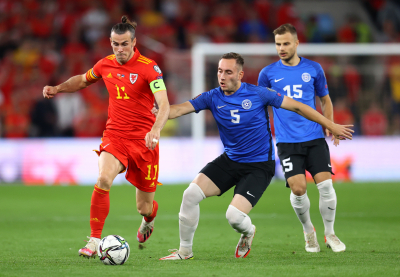 Wales' hopes of qualifying automatically for the 2022 World Cup look to be all but over after they were held to a deeply frustrating goalless draw at home to group minnows Estonia.

Despite an initially celebratory atmosphere at Cardiff City Stadium as it hosted an international match without crowd restrictions for the first time since 2019, Wales failed miserably to live up to the occasion.

It was Estonia, winless in Group E and ranked 110th in the world, who came closest to scoring in the first half as Mattias Kait hit the crossbar.

Wales had several chances to score after the break, but Gareth Bale and Tyler Roberts were both denied by excellent saves from Estonia's teenage Arsenal goalkeeper Karl Hein, while Bale also hit the post.

Wales are now nine points adrift of group leaders Belgium. Although Robert Page's side have played two games fewer, they now have to win all their remaining matches - November's home game against Belgium included - and hope the world's highest-ranked side drop points before then as well.

With that in mind, the play-offs now look like Wales' most realistic route to a first World Cup since 1958.

They are already effectively guaranteed a play-off place thanks to their success in the Nations League, but finishing second in this World Cup qualifying group could secure Wales a more favourable draw in that knockout stage.

The draw with Estonia keeps Wales third in Group E, behind the Czech Republic in second on goal difference and having played one game fewer.

Meanwhile Poland snatched an injury-time equaliser to deprive England of three points in Warsaw and a sixth straight victory in their qualifying campaign for the 2022 World Cup in Qatar.

Elsewhere Bailey Peacock-Farrell once again saved a penalty as Northern Ireland drew with Switzerland in an exciting World Cup qualifier in Belfast.