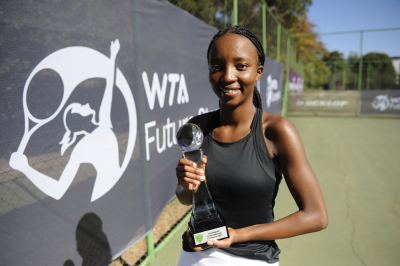 With less than three days to go before the Jozi Open, Tennis South Africa (TSA) has announced the players on whom it has bestowed wild cards.

Leading the list for the women is the Kruger sisters, Zoe and Isabella. The sisters have been having somewhat of a breakthrough season in the senior ranks, having fought gallantly in the Ilana Kloss International earlier this year in Potchefstroom.

Zoe has also recently reached the finals of the W15 Antalya, an ITF $15,000 WTT event in Turkey after a loss to Romanian Cristina Dinu.

Joining the Kruger sisters is 15-year-old rising South African star Lilitha Ndungane. The talented St. Mary's Waverly School learner, wrote her name into the history books earlier this year, as she become the country's first player to ever qualify for the WTA Future Stars tournament, to be held in Shenzhen, China later this year following her victory at the Growthpoint Junior Nationals.

On the men's side, Joshua Howard-Tripp gets a main-draw wild card, along with Luc Koenig and Robbie Arends.

Koenig has been in an inspired form this season, winning three junior ITF Grade 5 events in Durban and Potchefstroom.

Arends will make an appearance in his second ITF $25,000 WTT main draw event. He reached the second round in the M25 Potchefstroom earlier this year at the North-West University in Potchefstroom.

The country's top women's player Chanel Simmonds (ranked 421 on WTA rankings) and teen sensation Kholo Montsi are the only South Africans who earned direct entry into the tournament.