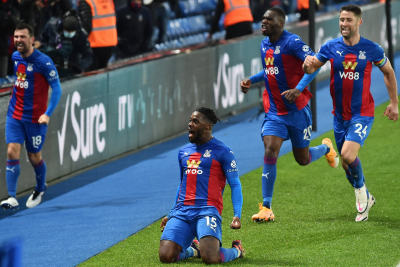 Odsonne Edouard scored twice on his debut to help Crystal Palace to a comprehensive 3-0 Premier League win over 10-man Tottenham Hotspur at Selhurst Park on Saturday.

Wilfried Zaha set the Eagles on their way, rolling in from the spot after Ben Davies was penalised for handball, before substitute Edouard added a second and third late on.

French forward Edouard, a deadline-day signing from Celtic, introduced himself to the Selhurst Park faithful in fine fashion, turning in Zaha's cross 28 seconds after coming on and then steering in Conor Gallagher's pass.

The result moves Palace up to 11th in the table and it was no more than they deserved after a dominant display against the league leaders.

"I think it was a really good team performance. We started the game quite well with a lot of energy. We competed quite well, managing to win the ball quite high," Palace manager Patrick Vieira said after his first win in the job.

I think it's a dream start for [Edouard]... We have to give credit to Christian Benteke who worked really hard in the first 70 minutes and when Edouard came on he took his goals well," Vieira added

The hosts were well on top even before Japhet Tanganga's dismissal, with the Spurs defender collecting two yellow cards in the space of five minutes before the hour mark.

That saw a second defensive reorganisation of the afternoon for Nuno Espirito Santo's side, with Eric Dier hobbling off on 12 minutes after being on the receiving end of a clattering challenge by Palace's Jordan Ayew.

Even so Spurs, who barely offered any threat of their own, had looked relatively solid until their late capitulation.

"It is a big concern, we had enough quality and talent to play better. We didn't do it, credit to Palace they were aggressive and they didn't allow too much time on the ball," Spurs manager Nuno Espirito Santo said.

More in this category: « Pirates aims to record their first win of the season against Swallows. McCarthy admits his players failed to live up to the challenge. »
back to top