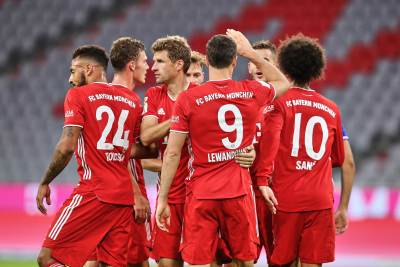 Bayern Munich moved up to second in the Bundesliga with an emphatic 4-1 win at last term's runners-up RB Leipzig.

Robert Lewandowski opened the scoring for Bayern, recorded his sixth goal of the campaign with a penalty.

Teenager Jamal Musiala volleyed the second shortly after the break, before teeing up Leroy Sane for the third.

Konrad Laimer superbly pulled a goal back for the hosts but Eric Maxim Choupo-Moting rounded off the scoring for the visitors late on.

Defending champions Bayern are now two points behind leaders Wolfsburg, who maintained their 100% winning start with a 2-0 victory at SpVgg Greuther Furth.

Four out of four wins for @VfLWolfsburg_EN ?

Haaland, who also grabbed an assist, cancelled out Florian Wirtz's opener with a towering header and later scored the winner from the penalty spot.

England midfielder Jude Bellingham had a goal ruled out for Dortmund shortly before half time and Schick capitalised to put Leverkusen in the driving seat going into the break.

But Leverkusen's lead lasted only minutes into the second half as Brandt controlled Haaland's pass with his heel before firing into the roof of the net.

Six minutes later, Diaby's long-range strike made it 3-2 to the hosts, but Guerreiro's superb free-kick once again brought Dortmund level.

Marco Reus was eventually awarded a penalty when he was struck in the face by the arm of Odilon Kossounou and Haaland kept his cool to slot in the winner for Dortmund in the 77th minute.

More in this category: « Cristiano Ronaldo scores brace on Manchester United return. "I’ve dreamt of this for many years" | Romelu Lukaku Post Match. »
back to top