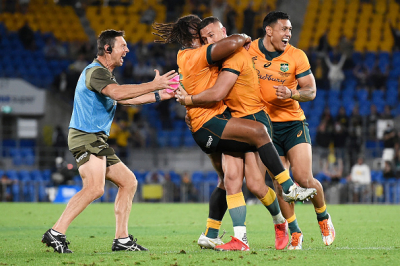 Cooper, who played the last of his 70 Tests in 2017 against Italy, returned to the international fold last month.And the 33-year-old was his side's hero, finishing with 23 points.

The first half of the match pretty much belonged to the Wallabies. Aside from their struggles at the driving maul, the home side dominated most of the other facets of play, seeing 66% of the ball. To their credit, the Australian scrum also stood up really well to the Springboks.

The Wallabies took an eight-point lead into the break, thanks to a well-worked try from Andrew Kellaway and four-penalties from Quade Cooper who, as expected, made all the difference in his first Test since 2017.

Jacques Nienaber’s side had the better of the kicking game, but were very out of character for much of the first half. Missed tackles and ill discipline contributed to their woes and the Boks looked a bit frenetic in their rush defence. Illustrative was captain Siya Kolisi’s yellow card for a needless tip tackle on fullback Tom Banks, as well as the Wallabies winning a penalty from a five-metre scrum just before the break.

The defending champions possibly also did not punish the Wallabies enough during the time that lock Matt Philip was off with a yellow card for repeated maul infringements. During that period, Bok hooker Bongi Mbonambi went over for a try, but Cooper’s third penalty meant that the Wallabies had only technically sacrificed two points of their lead.

It left the Springboks with plenty to do in the second half. The South Africans didn’t help themselves as their frenetic play continued. Pollard missed a shot at goal before Willie le Roux was yellow-carded for an intercept attempt. That allowed the Wallabies to keep the lead at eight points.

However, the Boks’ attempts to get back into the game were given a major boost when, just after Folau Fainga’a was yellow-carded for a no-arms tackle, Malcolm Marx scored a try from another powerful maul that was converted by Pollard. It made it a one-point game going into the last 20 minutes of the match.

Cooper’s sixth penalty extended the Wallabies’ lead to four points, but another few driving mauls saw Marx go over for his second try to give the Boks the lead with seven minutes left to play.

The result saw the Wallabies bounce back from a run of three successive losses to New Zealand, while it continued the Springboks’ own winless streak in Australia since 2013.

The defending Rugby Championship champions now find themselves five points behind the All Blacks on the table and will have to pull off something considerable to keep ahold of their title.

The Wallabies put the pressure on the Springboks in the closing stages of the match. Despite the Boks enjoying three successive dominant scrums, it was the Wallabies who won a penalty just on the full-time hooter. That saw Cooper with the opportunity to complete his fairy-tale comeback, which he held his nerve to take.

Earlier, New Zealand thrashed Argentina to secure their third bonus-point win in as many matches to stay top of the table.

More in this category: « All Blacks thump Argentina 39-0 in emphatic all around performance. Inter Milan pegged back twice as battling Sampdoria earn draw. »
back to top