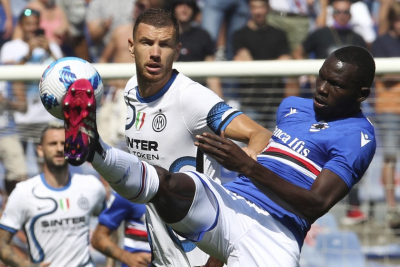 Inter’s Edin Dzeko, left, and Sampdoria’s Omar Colley vie for the ball during the Italian Serie A soccer match between Sampdoria and Inter Milan at the Luigi Ferraris stadium in Genoa, Italy, Sunday, Sept. 12, 2021. (Tano Pecoraro/LaPresse via AP).

Sampdoria fought back twice from behind to hold Serie A champions Inter Milan to a 2-2 draw on Sunday, as Simone Inzaghi's side dropped points for the first time this season.

Lautaro Martinez then delightfully finished off a slick counter-attack for Inter on the stroke of half-time before Tommaso Augello smashed in a left-footed volley after the break.

Both sides had chances to take all three points but neither found the decisive breakthrough, leaving Inter second with seven points and Sampdoria in 13th place with two points.

On Saturday,Napoli maintained their 100% record by beating winless Juventus, who were playing their first game since the departure of forward Cristiano Ronaldo to Manchester United.

More in this category: « Quade Cooper leads Australia to famous win over South Africa on return to Test rugby. Daniel Ricciardo wins at Monza in McLaren one-two finish. »
back to top