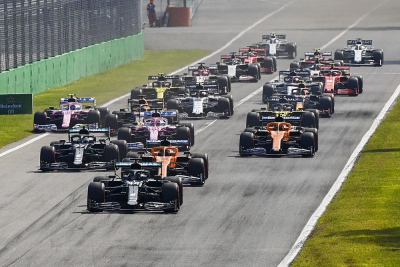 Red Bull's Verstappen flipped up beside Hamilton as the pair battled for position, the rear of Verstappen's car landing on Hamilton's Mercedes, the halo head protection device possibly saving the seven-time champion from injury.

Both retired, beached in the gravel, meaning Verstappen remains five ahead of Hamilton in the title race.

Ricciardo's British team-mate Lando Norris was second after a brilliant late overtake, handing the team a first one-two since the 2010 Canadian Grand Prix and their first victory in nearly a decade.

Ricciardo screamed over team radio as he crossed the line: "Whaaaaaaaaaaaaaaaaaaa! Yes! For anyone who thought I left, I never left. Thanks guys."

Following a rocket start by Ricciardo from second on the grid, Verstappen feel back to second place, as Hamilton battled with Norris for third after failing to gain a place.

As the race appeared to settle down into a pattern of both title rivals being held up by a McLaren, Verstappen reacted to Ricciardo's first pit stop by coming in and suffering a slow 10-second pit stop with what appeared to be a poorly positioned front-right wheel.

At the same time, Hamilton was busy overtaking Norris - as he benefited from starting the race on hard compound tyres, with all other front runners on worn mediums - and then came in for his stop.

But he also suffered a tardy stop and the pair met by chance on track as Hamilton left the pits. The Briton held the inside line and Verstappen refused to yield on the outside as they entered the slow-speed Rettifilo chicane.

Verstappen had more than half a car's length by Hamilton, but was squeezed off the track and as his Red Bull bounced against the kerbs, a rotating rear wheel launched him into the air and pitched it over Hamilton's car before thumping down on the air box which sits just above the driver's head.

The car's flat chassis slid down across Hamilton's cockpit and appeared to make contact with the halo head protection device introduced into F1 in 2016 following the deaths of Jules Bianchi in F1 and Justin Wilson in American Indy car in 2015.