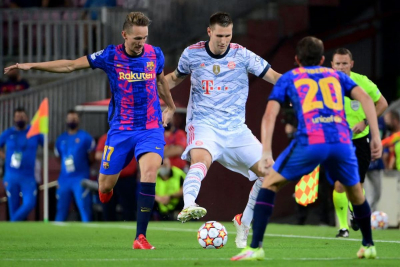 Goals from Thomas Muller and Robert Lewandowski settled a battle of the big two in Champions League Group E as Bayern Munich claimed a dominant opening-game victory at Barcelona.

The German champions controlled the game, with Muller scoring his seventh career goal against Barca courtesy of a first-half effort that found the net off Eric Garcia's back.

Lewandowski made sure of the win with a typical predatory finish, poking his 74th Champions League goal into an empty net after Jamal Musiala's drive had cannoned back off the post.

His 75th came late in the game, as he once again showed his talent in front of goal with a lashed finish after Serge Gnabry's shot had come back off the post and fell to him in the box.

Barca, playing their first Champions League since the departure of talisman Lionel Messi, were flat and offered little, failing to muster a single shot on target.

They ended the game with four teenagers on the pitch, which did at least inject some urgency and lift a subdued crowd of just short of 40,000.

They were still thoroughly outclassed, though, and by a Bayern team that were not even at their best.

Lukaku, a £97.5m summer signing from Inter Milan, has already demonstrated his goal threat in the Premier League and was on the mark again with his first goal for Chelsea in the competition they won for the second time against Manchester City in June.

Chelsea were made to work hard as Zenit dug in but manager Thomas Tuchel's side stepped up the pace after the interval, Lukaku breaking the deadlock when he headed in at the far post from Cesar Azpilicueta's cross in the 69th minute.

The holders deserved the victory but Zenit missed a glorious chance to snatch a point when substitute Artem Dzyuba slid wide from six yards as he tried to turn in Sardar Azmoun's cross late on.

Juve were under pressure early on in Sweden before Alex Sandro's low header gave the Italians the lead.

Two goals in the space of 86 seconds at the end of the first half then took the game away from Malmo.

Paulo Dybala scored from the spot after Morata, 28, was fouled by Lasse Nielsen before Morata's clever lob made it 3-0.

It was the perfect start for Massimiliano Allegri's side in their Group H campaign.

Juve, who have not been crowned champions of Europe since 1996, face defending champions Chelsea next in Turin on 29 September.

More in this category: « Proteas thrash Sri Lanka by 10 wickets to sweep series 3-0. Orie, Nyakane start as Springboks tweak pack for second test. »
back to top