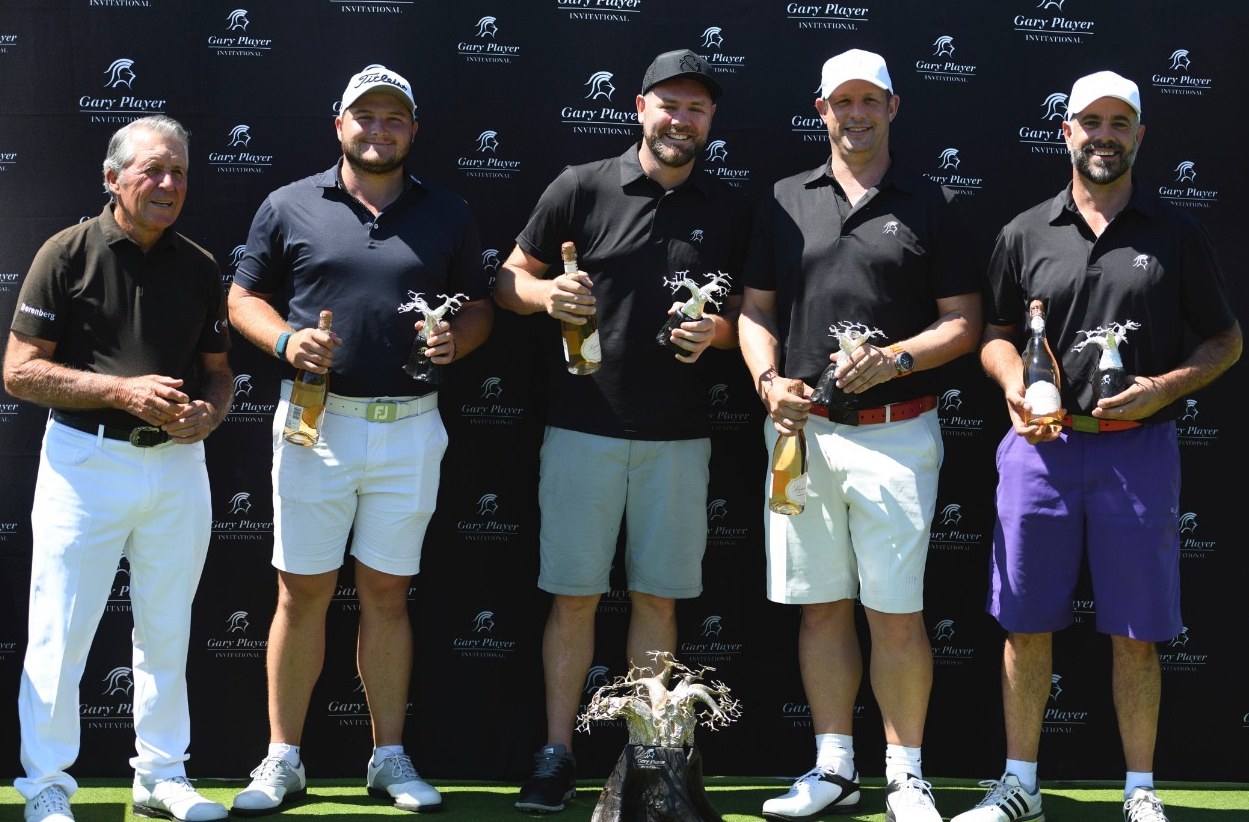 The 20th anniversary of the Gary Player Invitational was indeed one of the most memorable as Sunshine Tour professional Zander Lombard and his team including Irish pop star Brian McFadden celebrated their tournament victory against the backdrop of an incredible R2.3 million raised for The Player Foundation at Sun City this weekend.

Lombard, a week after leading the Nedbank Golf Challenge hosted by Gary Player for two days at Sun City before finishing tied eighth, led his team of McFadden and businessmen Adrian Moors and Mark Ilsley to a three-point victory on 188 points at the Lost City Golf Course on Sunday.

McFadden was delighted to be on the winning team in this tournament for the second time.

“I won here when Gary Player celebrated his 80th birthday, and now I’ve won on the 20th anniversary of the Gary Player Invitational,” he said.

“But the truth is that it’s just incredible to play a part in what the Gary Player Invitational Series is doing around the world. They have raised over $64 million for The Player Foundation and you can see all the people it has helped. We’re just here to try and do our part.”

It was a message echoed by businessman Moors.

“It’s fantastic to win, but it’s more about the fundraising and how many people benefit from the work of The Player Foundation,” he said.

The funds raised will be used to help the selected beneficiaries Wings and Wishes and the Blair Atholl School.

“We are so grateful for the support of The Player Foundation,” said Inge Human, Manager: Wings and Wishes.

“Government and private healthcare do not pay for the transport of chronically ill children from rural areas to facilities where they can be treated, so that’s the role we fulfill. We transport six children seven days a week and 365 days a year.

“The Player Foundation and the Gary Player Invitational are our biggest donors and without them we would not be able to help these children,” she said.

Former Proteas cricket captain Shaun Pollock was one of the many sports stars who participated this year, and he summed up the weekend of #GolfAndGiving as one of the most memorable in the many Gary Player Invitational tournaments he has played in.

“It was organized and run in a great way, in a great atmosphere and for a great cause. You help to raise money and that means you get to change the lives of children,” he said.

Evan Mervis from Rolex left with a similar appreciation of the tournament’s impact for charity.

“Every year we come here and listen to a beautiful message of hope and encouragement,” he said.

And Thabo Mosololi, the Chief Operating Officer of Sun International, said the timing of this year’s tournament was particularly special for them as hosts.