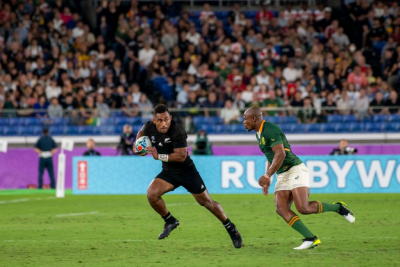 The under pressure Springboks have addressed the mounting criticism from their own fans ahead of this Saturday’s final Rugby Championship match against the All Blacks on the Gold Coast.

Springboks are currently on their worst Test game losing streak since 2016 when the lost their last four matches that year, getting hammered at home by the All Blacks before drawing a blank on their European tour against England, Italy and Wales.

Currently under Jacques Nienaber they have lost all three matches since their arrival in Australia, losing twice to the Wallabies and again last weekend versus New Zealand.While two of those losses were confirmed by last-gasp penalties from Quade Cooper and Jordie Barrett as a time when the Springboks were poised to take Championship victories, the general commentary about the team’s form hasn’t been kind.

Having followed up their 2019 World Cup triumph with success in the recent Test series versus the Lions, Springboks fans are not used to losing and there is upset about a run of defeats that hasn’t been experienced for five years dating back to the era when Allister Coetzee was unconvincingly in charge of the team.

Springboks skipper Siya Kolisi understood why supporters are feeling anguished about their disappointing Championship. He even put himself in their shoes at an eve-of-match media conference at Surfers Paradise, describing how he gets upset as a fan when the various sports teams that he follows such as Liverpool FC don’t win, but he insisted the recent run of losses isn’t down to any lack of effort.

Some guys read and some guys don’t read the stuff on social media," he said. "People are impressionable about rugby now and we can’t get upset about that. People were happy with us but now they are upset and its good for us. It’s not good obviously what we are going through right now losing three games in a row but people care.

"That is the thing. People care and this team means different things to different people. I can’t get upset with that. When I watch my favourite sporting team (Liverpool), I get upset, I get emotional, so I can’t get upset with people (over the Springboks). It is tough. Friends and family are also hurting so it is understandable. It hurts and we’re hurting too. We are here preparing the whole time to try and win the games and when we lose and it is tough on us and we understand what people are going through.

As teammates, all we can do is keep on working. We went back after the game (last weekend) and went, 'What could we have done, how many opportunities could we have taken?' You look at the game and you see, yes, we could have done that better there, if our discipline was better, if we didn’t give someone so many penalties, all those kind of things, and we worked again on them this week.

"All we can do on Saturday is to be disciplined and what we do, going in and giving it our best. That is all we can do. We are hurting as well as the supporters. There is nothing any of us in this team and this management can say. Results are the only thing. There is nothing I can say to change how people feel, only by the way we play Saturday.

"It’s all about results at the end of the day and the results are not showing that the effort is there, the attitude is there. The biggest thing for is us to just play and hopefully we will get a result and hopefully in our efforts you can see we are not giving up, we are not even thinking about that kind of stuff. But the only way you can tell people (this) is by winning and the effort that you put in."

More in this category: « Galaxy desperate for a first win following coaching change. Top trio chasing title at historic Origins of Golf Humewood. »
back to top