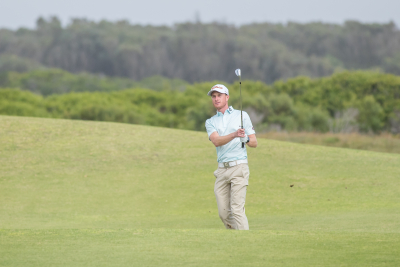 GQEBERHA, Eastern Cape – Malcolm Mitchell dared to take Driver on a dozen holes on Friday in the second round of the Vodacom Origins of Golf Series at Humewood Golf Club and quickly reaped the rewards as he raced up the leaderboard with a five-under-par 67 lifting him into a share of the lead heading into Saturday's final round.

The wind was still up on Friday but Mitchell dropped just one stroke on his way to a total of four-under-par after the first two rounds, tied with 27-year-old Richard Joubert and veteran Hennie Otto.

Collecting six birdies, three on each loop, suggests an aggressive approach by the former Eisenhower Cup representative, but apart from backing himself with Driver, Mitchell felt his strategy was pretty risk-free.

"The two parts of my game that have been good for a while have been my driving and putting, which really helps on a links course. There were only two holes where I did not take Driver, but I've only missed four or five fairways on the first two days, so I've pretty much always been in a good position and my putting has been very good over the last while.

"In terms of being aggressive, in the moment there might be one shot that I might feel I can have a go at, but then there are others where I'll aim 20 feet right or short. So I don't go at it too much, I don't change game-plans and I just try to stay in the moment and enjoy it," Mitchell said after his round.

And being focused on the present and having fun is exactly what Mitchell will be doing in the final round, having learnt some lessons from his runners-up finish in August in the SunBet Challenge at Wingate Park Country Club in Pretoria. In that tournament he also went low in the second round, a 65 lifting him to second, but then he closed with a 72 to leave him three adrift of Estiaan Conradie.

"It's funny how life teaches you different things. You work so hard to stay in the present but then sometimes you mess it up and get ahead of yourself or start thinking of the past. But winning three times in 2019 always sits there. Those memories are there to go back on, they can only help. It means I've been there, even though it was the Big Easy Tour, and knowing how to win definitely sticks in the back of your mind," Mitchell said.

One man who is unlikely to have any trembling knees if he stays in contention on Saturday is Otto, because he has done it all before with 13 wins on the Sunshine Tour, the most recent being at the Sibaya Challenge in October 2019. The 45-year-old also finished in a tie for second in the Vodacom Origins of Golf event at Sishen at the end of August.

Otto has had a run of four successive top-30 finishes on tour and the former SA Open champion was looking dangerous as he fired a four-under-par 68 on Friday.

Joubert was just one stroke off the lead after the first round and, starting on the 10th, he soared into the lead with an eagle on the par-five 11th and then holed out for an eagle-two at the par-four 16th. Bogeys at 17 and 18 undid some of that amazing work though, and he dropped two more shots on the front nine, but finishing with three straight pars gave him a 71 and he is far from done-and-dusted in this race.

Overnight leader Tristen Strydom shot a 73 on Friday and is one stroke back on three-under for the tournament, alongside Michael Palmer (68) and Daniel Greene (69).

There are three golfers two shots back on two-under-par who will need to be watched carefully as well – Christiaan Basson (68), Jean Hugo, who fired a brilliant 66, and Jayden Schaper (69).

More in this category: « Boks need to win to avoid matching unwanted 2016 record of four consecutive losses. Bayern Münich aims to extend their winning streak. »
back to top