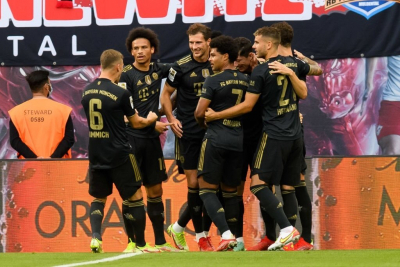 FC Bayern München will be aiming to extend their winning streak and compound Eintracht Frankfurt's miserable start to the Bundesliga campaign and when the pair face off on Sunday.

Julian Nagelsmann's Bayern have cranked into top gear over the last month and the record German champions have strung together five league wins, just one short of setting a 2021-best run. Frankfurt appear to be the ideal opponent given Oliver Glasner's men are yet to claim a maximum points haul in 2021/22. They also have the task of countering Robert Lewandowski in top form, and the Poland international loves playing Die Adler: he's netted six times in their last four meetings.

If Bayern do slip, then second-placed Bayer 04 Leverkusen could close the threepoint gap to the leaders, whom they play on Matchday 8, when they go to DSC Arminia Bielefeld in Sunday's late kick-off. Teenage sensation Florian Wirtz could become the youngest U19 player in Bundesliga history to reach 11 top-flight goals if he finds the net and helps Die Werkself to a third successive league win.

RB Leipzig roared back into top form with a 6-0 thumping of Hertha Berlin last time out - their second-biggest Bundesliga win ever - and Jesse Marsch's men are overwhelming favourites to maintain momentum in their maiden top-flight encounter with VfL Bochum. The visitors to the Red Bull Arena have the weight of history against them too with Leipzig yet to lose in 20 Bundesliga matches against a newly promoted side.

Hertha Berlin will be hoping their five-game unbeaten run at the Olympiastadion against SC Freiburg can help lift them out of their dip, though the Black Forest outfit have been one of the surprise packages of the early stages of the campaign. Christian Streich's side have gone unbeaten in the first six games of the season - the only team to do so other than Bayern - setting a new club record in the process.

Another team enduring a downturn in form and fortunes is VfL Wolfsburg with Mark van Bommel's side picking up just a single point from their last two games. They'll be crossing their fingers that Borussia Mönchengladbach - victors over Borussia Dortmund on Matchday 6 - remain without a point on their travels this season when Adi Hütter's men leave the Volkswagen Arena on Saturday.

Like their namesakes, Dortmund have been strong at home so far, winning all three matches at the Signal Iduna Park. Marco Rose's side will be optimistic of making that four against a struggling FC Augsburg side that has managed to find the net on just two occasions so far.

Along with Freiburg, 1.FC Köln have raised eyebrows. The Billy Goats have only been beaten by Bayern this season, and have not tasted defeat in any of their last four Bundesliga matches; bottom side Greuther Fürth have their work cut out to improve on their tally of just a single point so far when they visit the Domstadt.

Few would have expected 1. FSV Mainz 05 to be in a position to go into the second international break of the season in a top-five spot, but they could do that if they defeat 1. FC Union Berlin, while VfB Stuttgart will hope to move away from danger by ending their five-game winless run at home to TSG 1899 Hoffenheim.

In Bundesliga 2, leaders Jahn Regensburg host mid-table Karlsruhe SC on Saturday with just a one-point lead over FC St. Pauli, who will have a stiff test at home to Dynamo Dresden - currently in sixth - on Sunday.