Bulls’ coach Jake White says conditions did not suit his side following defeat to Connacht. 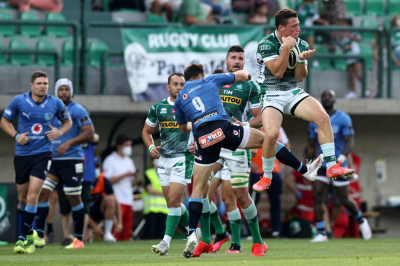 Connacht secured a decisive and well deserved victory in their opening home fixture of the new United Rugby Championship against first-time visitors Vodacom Bulls at the Sportsground.

In a game that always had the potential to turn into an arm wrestle, Connacht withstood the early pressure from the South Africans with a superb scrambled defence, and adhered without fail to their new mantra to be fast and relentless.

Connacht were forced to recover from a disastrous opening as the Bulls took early control and struck within a minute. It was all too easy as Zak Burger was given acres of space as he burst through from a breakdown, and Connacht’s scrabbling defence was caught out when outhalf Johan Goosen sent the ball through for Harold Vorster before loosehead prop LIzo Gqoboka burst through from closer to the line with outhalf Goosen converting.

It certainly woke Connacht out of their slumber and when they found their rhythm and pace, they soon began to dominate possession. The opening score came eventually off a superb maul, Cian Prendergast securing the lineout, and with a penalty advantage, Connacht went wide, with Jack Carty, Tom Daly, and John Porch all handling before fullback Tiernan O’Halloran finished. Carty added the extras to put the teams level after 16 minutes.

Connacht should have been ahead after a superb counterattack, when a Porch try was ruled out for a forward pass. However, it was the host’s defence that stood up time after time, and two successive penalties enabled them to gain territory. Although Prendergast was stopped just short of the line, Carty added a penalty after 34 minutes to take a lead they would never relinquish.

The home side continued to maintain the momentum after the break with Papali’i leading several charges, along with the hardworking Dave Heffernan. Eventually the high tempo paid off, and it was a superb finish from Tom Daly who broke two tackles to score, with Carty adding the extras.

Within minutes Connacht had added another - a 48th minute try from Mack Hansen that had the Sportsground faithful on their feet. The new Aussie recruit, making his home debut, secured possession in his own half, and, evading would-be tacklers, he did not stop until he scored. Carty’s conversion, after the TMO upheld the try, hit off the uprights, leaving Connacht 22-7 in front.

Connacht’s fourth try arrived on 72 minutes - Tom Farrell taking an attacking line that exploited space to race in from 30 metres. Carty’s conversion made it 29-7 and in the last minute Tom Daly added his second try as the Fields of Athenry broke out for the first time in 18 months.

Connacht head coach Andy Friend says the victory will give Connacht a shot of confidence for the future:

"It is a new style of footy, and while we believe in it we have had pretty heavy defeats in pre-season and a heavy defeat last week, so a loss tonight probably would have put us under more pressure.

"We have belief in what we are doing and it’s nice to get a really good performance against a formidable side, and to knock them off gives us a shot of confidence. So there is relief, but also great belief, and if we can keep stay on task, we are only developing it, and there is more to come."

Bulls’coach Jake White said the conditions did not suit his side:

"The way we want to play, it does not help to play on a field like this or in conditions like these, but we were not accurate either. Our scrum and lineout were better than last week. We’re going to have to find a way to put it in the memory bank and get better."

More in this category: « Punjab Kings beat Kolkata Knight Riders by five wickets. Guardiola says Jurgen Klopp rivalry has made him a better manager. »
back to top