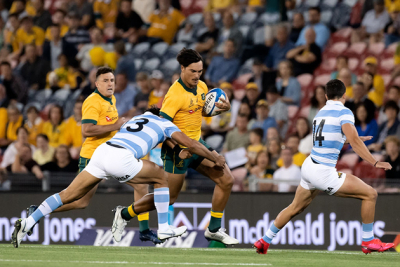 Andrew Kellaway scored three tries as Australia finished the Rugby Championship on a high with a fourth straight win.

The Wallabies scored two first-half tries within eight minutes while Argentina lock Tomas Lavanini was in the sin-bin and added three more in the second half to win 32-17 on Saturday at Robina Stadium.

Two late, close-range tries to replacement frontrower Thomas Gallo helped reduce the margin from 29 to 15 points and add a small piece of consolation for the Pumas.

The Australians ran out of replacements after taking a commanding lead and losing center Samu Kerevi and winger Jordan Petaia to injuries, forcing a reshuffle and allowing the Pumas to take advantage of the disjointed defense.

For Australia, Japan-based Sean McMahon played the last quarter of the match to earn his first test cap since 2017 and 38-year-old prop Greg Holmes became the oldest Wallabies player to appear in a test since World War II when he went on as second-half replacement.

The bonus-point victory secured a second-place finish in the Championship for Australia behind New Zealand.

The All Blacks secured the title with victory over Springboks last week.

At 32-3, there was a bit of frustration," Wallabies coach Dave Rennie said. "We wanted to put the foot on the throat, and just lacked a little bit of accuracy, discipline, and gave them some soft possession, and then we just didn’t defend well from there either.

"Our defense was excellent for the majority of the game but disappointing for that last stage.

Pumas coach Mario Ledesma said ill discipline and a failure to convert scoring chances hurt his team again but the late tries were a boost.

"There was a show of character after two months of a lot of effort and sacrifices, and after a difficult week," he said. "Maybe the game was done. But you still have to do it."

Ledesma said he started the tour with 48 in the squad and, because of injuries and players unavailable, had 32 to select from for the final game. He said what the Pumas most needed now was a rest.

The Argentina-based players in the Pumas squad will fly home on Sunday and others will return to Europe before re-assembling again for three more tests in France, Italy and Ireland next month.

More in this category: « Guardiola says Jurgen Klopp rivalry has made him a better manager. Greene is gold in Vodacom Origins of Golf series playoff. »
back to top