Elton Jantjies penalty at the death gives Springboks victory over All Blacks. 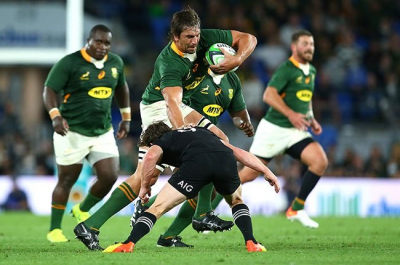 Springboks have exacted revenge on All Blacks with a penalty kick by Elton Jantjies two minutes after fulltime securing an incredible 31-29 victory in the final round of the Rugby Championship.

It appeared that the world champions were headed for their fourth successive loss after Jordie Barrett booted a penalty in the 78th minute to put the All Blacks in the lead.

In their first clash in Townsville last Saturday, fullback Barrett stepped up to seal a 19-17 win in the same thrilling fashion.

South Africa won a penalty in extra time but rather than veteran Francois Steyn attempting a long-range penalty he booted it downfield.

The Boks managed to secure the match-winning penalty, with Jantjies stepping up to nail the memorable win.

It denied New Zealand a clean sweep of the Rugby Championship.

The All Blacks scored three tries in the first stanza to steam to a 20-14 halftime lead with a sensational five-pointer by captain Ardie Savea the stand-out.

Five-eighth Beauden Barrett made the break before off-loading to Rieko Ioane, who trampled over hapless Boks fullback Willie le Roux before offloading to Savea to swan-dive across the line.

Halfback Brad Weber, in just his third start, snaffled a try after a line-out turnover while winger Sevu Reece also scored thanks to a le Roux spill off a restart and Beauden Barrett kick to the flanks.

South Africa also had their moments of brilliance with centre Lukhanyo Am slipping a pass behind his back to winger S'busiso Nkosi who found a charging Damian de Allende for a fifth-minute try.

The Springboks rang the changes early and it proved a decisive move with their replacements stopping the All Blacks in their tracks.

After two penalty strikes, they hit the lead 22-20 in the 51st minute when Steyn kicked a 50:22 and from the lineout, South Africa sent the ball wide for Makazole Mapimpi to score in the corner.

Handre Pollard again missed the conversion before a Jantjies penalty took over the kicking duties to extend the lead to five points.

That was the sole try of the second half with defence from both teams brutal, with penalties, as well as a 76th-minute drop goal by Jantjies keeping the scoreboard ticking over.

More in this category: « Greene is gold in Vodacom Origins of Golf series playoff. Andros Townsend scores equaliser and imitates Ronaldo celebration. »
back to top