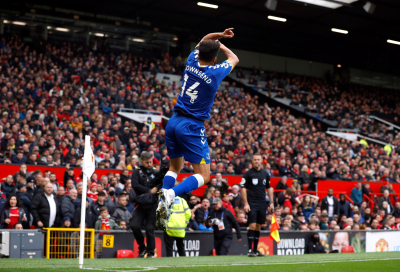 Manchester United endured another frustrating afternoon in the Premier League as they were held to a 1-1 draw by Everton at Old Trafford.

Anthony Martial put United ahead on 42 minutes before Andros Townsend levelled things up just after the hour mark. In a late twist, Yerry Mina's late effort was ruled out for offside as both sides had to settle for a point.

The result increases the pressure on United manager Ole Gunnar Solskjaer, who have picked up one point in six and have failed to keep a clean sheet in nine league games -- their worst defensive run in 50 years.Andros Townsend's second-half equaliser earned Everton a deserved point against Manchester United at Old Trafford.

Solskjaer sprang a big surprise ahead of the match by dropping Christiano Ronaldo and Paul Pogba to the bench, with Martial starting despite a meagre return of two goals in his past 24 appearances for the club ahead of the game. Everton, meanwhile, were without Dominic Calvert-Lewin and Richarlson through injury, while Alex Iwobi failed a late fitness test.

Rafael Benitez's men were unlucky to fall behind just before the break as Anthony Martial scored for the first time since February.

But Demarai Gray escaped the attentions of Fred and Aaron Wan-Bissaka as Everton countered from a United corner, setting up the attack which ended with Townsend driving a low shot into the corner from Abdoulaye Doucoure's lay-off.

Townsend celebrated in Ronaldo-esque manner. It was more than the man himself managed. Left on the bench after his injury-time winner against Villarreal on Wednesday, Cristiano Ronaldo came on in the 57th minute but had minimal impact either before or after the equaliser.

Everton thought they had a winner four minutes from time but VAR intervened to rule Yerry Mina's tap-in out for offside.

The result completes a decidedly unimpressive run of home results for Ole Gunnar Solskjaer's team, who lost against Aston Villa seven days ago after being dumped out of the EFL Cup by West Ham.

More in this category: « Elton Jantjies penalty at the death gives Springboks victory over All Blacks. SAFA support FIFA’s plan to stage a biennial World Cup. »
back to top