Chiefs awarded a controversial penalty to salvage a point. 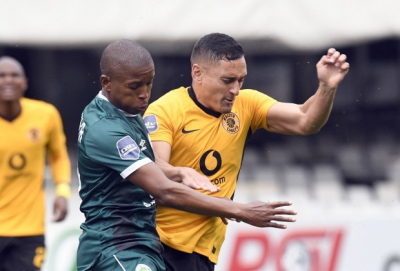 Kaizer Chiefs extended their winless run to four 2021/22 DStv Premiership matches when they drew 1-1 with AmaZulu FC at the Jonsson Kings Park Stadium on Saturday afternoon.

Chiefs were controversially awarded a penalty in second-half stoppage time when replays suggested that there was no handball by any Amazulu player.

Amazulu dominated possession from the first whistle with Chiefs happy to sit back and play on the counter - using their speed advantage on the flanks where Khama Billiat and Keagan Dolly were operating.

With the game opening up a bit more in the closing stages of the first half, Veli Mothwa was proving his worth after denying Bernard Parker and Billiat with some impressive saves.

Chiefs piled pressure on AmaZulu with the halftime break approaching, but Mothwa was in great form as he pulled off a fantastic save to deny Parker from close range, before tipping Billiat's powerful shot over the crossbar.

Amakhosi were left to rue their wasted opportunities from the first-half when the hosts opened the scoring as Keagan Buchanan set-up Luvuyo Memela, who controlled the ball well, before firing past Daniel Akpeyi to hand AmaZulu a 1-0 lead in the 48th minute.

Usuthu did not sit back after taking the lead as they continued to attack and Akpeyi became a busy man - producing a fine save to deny Memela from close range, while he also blocked a powerful shot from Thabo Qalinge.

The momentum was with Chiefs in the closing stages with Phathutshedzo Nange and Dolly both being denied by Mothwa, and Chiefs duly introduced Lebogang Manyama as the visitors looked to snatch a late equalising goal.

Manyama was keen to make an impact on the game and Chiefs were awarded a penalty in stoppage time after his cross was controversially handled by Tapelo Xoki in the box, and Dolly converted the resultant penalty to ensure that the game ended in a 1-1 draw.