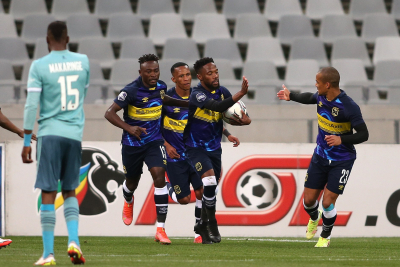 Cape Town City and Orlando Pirates played out to a draw at the Cape Town Stadium on Saturday evening.

The match ended 1-1,with Pirates leading early on through captain Happy Jele, only for City to hit back in the second half through a Mduduzi Mdantsane penalty.

Pirates decided to grant new signing Olisa Ndah his first start in defence, while City went for Surprise Ralani and Fagrie Lakay up top after their impressive showing against Swallows in the MTN8.

The Soweto giants snatched the lead on 13 minutes after Jele beat City goalkeeper Hugo Marques to a cross from the left-side to head into the back of the net.

City started to ask questions following a quiet opening quarter and saw a diving header at the far side from Thamsanqa Mkhize going over the top.

Tshegofatso Mabasa had a good chance to double the lead for the visitors four minutes later after finding himself one-on-one with Marques from a long ball but he scuffed his effort straight at the Angolan shot-stopper.

Pirates also got a stroke of luck when midfielder Abel Mabaso was not shown a second yellow card for a late challenge on Mduduzi Mdantsane, and the half ended with the Buccaneers 1-0 up the score sheet and the teams still level with 11 players apiece.

The Citizens were fired up coming from the half-time break and were awarded a penalty seven minutes inside the second stanza after Mdantsane's shot struck Ndah's arm inside the box and he stepped up himself to convert the spot-kick.

With the visitors struggling to create chances, the technical team made a couple changes as Kabelo Dlamini replaced Terrence Dzvukamanja while Deon Hotto came on for Mabasa in the attack.

It was City though who looked most likely to claim the win as they rallied hard in the closing stages of the game and Taariq Fielies was nearly the hero for the Cape side when he went close with an 89th minute header from a corner.

There were also openings late on for Terrence Mashego, Khanyisa Mayo and Mpho Makola, who spurned a great chance to bury his former club when he curled a 94th minute effort over goal.

The draw leaves Pirates with nine points and City on six. Log leaders Sundowns (13 points) play Swallows FC on Sunday and will move seven points above Pirates if they beat the Birds.