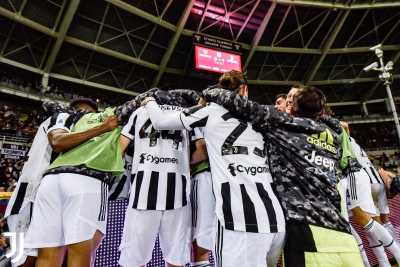 Manuel Locatelli struck late to earn Juventus a 1-0 win over Torino in the Turin derby on Saturday, as the Old Lady stretched their winning run to four games in all competitions and kept a Serie A clean sheet for the first time in seven months.

The Italy international fired a shot in off the post with four minutes remaining, his second consecutive league goal, as Juve rose to eighth place with 11 points, three ahead of their 11th-placed rivals.

Locatelli kept his nerve to finish calmly from the edge of the area after Torino kept the visitors at bay for much of the game.

The Old Lady managed to stop a run of conceding goals, one match short of their unwanted record of 21 consecutive games.

Juventus should have been ahead a number of times in the opening minutes. Moise Kean shot wide within two minutes, before Weston McKennie blasted over from inside the area.

At the other end, Sasa Lukic missed a golden chance with a header, while Rolando Mandragora forced Wojciech Szczesny into a smart save from distance.

Juan Cuadrado almost put Juve ahead seven minutes after the break, but his header was saved at point-blank range by Vanja Milinkovic-Savic.

Juventus kept things tight defensively to end a run stretching back to March of 20 matches in a row conceding in Serie A.

More in this category: « Pirates,Cape Town City share the spoils. Brighton dominate Arsenal but fail to make pressure pay in goalless draw. »
back to top