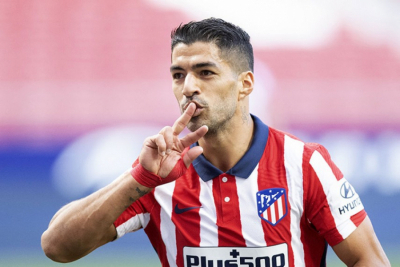 Thomas Lemar scored the opener, finishing well at the end of a move involving Joao Felix and Suarez.

Suarez then slotted in against his former club to put Atletico in charge.

Antoine Griezmann also featured against his former club as a late substitute as Atletico basked in their superiority.

"I knew [I wouldn't celebrate] out of respect, out of affection, for being a Barca fan, for the time I spent at Barcelona, for the moment my ex-teammates are going through, the fans too -- it's difficult," Suarez said after the match. "It's respect."

"So people know that I still have the same number and keep using the telephone," he said jokingly, before being questioned about whether it was directed at Koeman, the man who effectively pushed him out of Barcelona a year ago. "No, no, no, not at all. If he wants to take it personally ... No, I'd agreed with my kids as a joke that I'd do that."

For all the woe surrounding Barca this season, this loss was actually their first in La Liga - but it leaves them eighth in the table on 12 points, five behind Diego Simeone's side, who are second only on goal difference but have played a game more than rivals Real.

Prior to this, Barca had three wins and three draws to their name, with back-to-back chastening 3-0 losses in the Champions League doing most to harm Koeman's position at the club.

Barca had chances on Saturday, especially at 1-0, with Philippe Coutinho volleying an effort just wide and Frenkie de Jong just inches away from converting from close range following Memphis Depay's header across goal.

Coutinho also had a great chance to get the visitors back into the game in the second half but saw his shot from inside the box saved by Jan Oblak.

Despite having much more of the ball, Barcelona were second best at the Wanda Metropolitano, falling to a defeat that may well test president Joan Laporta's assertion from earlier on Saturday that Koeman would continue at the club regardless of the result in Madrid.

"It's important and well done for his part - because if everything isn't clear in this sense, then it's difficult to work and have the kind of calm you need to try to make the changes we are trying to implement," Koeman said after Saturday's game.

"We know how it is from today moving forwards... We spoke last night on the phone and then again this morning."

Barca now have a two-week break from action for internationals, with their next fixture at home to Valencia on 17 October.

"There's a solution [to what is happening], but it can't be done overnight," added Koeman. "We have to work hard, give time to the youngsters and get back our injured forwards."

More in this category: « Brighton dominate Arsenal but fail to make pressure pay in goalless draw. Gaikwad's superb century in vain for Chennai as Rajasthan chase down 190 in style. »
back to top