Gaikwad's superb century in vain for Chennai as Rajasthan chase down 190 in style. 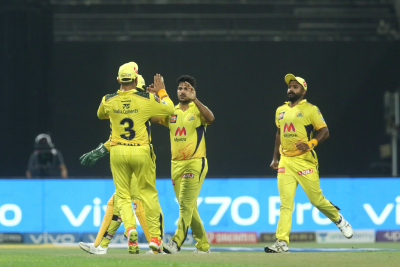 Earlier, Chennai made 189-4 with Ruturaj Gaikwad hitting a maiden T20 century from the final ball.

Rajasthan are now sixth in the table, but will likely need to win their final two games to earn a play-off spot.

They are one of four teams on 10 points, with net run rate looking more likely to decide who progresses.

Chennai have already qualified, but a place in top two, which means playing in the qualifier and having two chances to reach the final, is no longer in their own hands.

Faced with a required run-rate of 9.50 an over, Rajasthan had little option but to go out and attack.

They did just that, motoring to 75-0 after five overs.

Jaiswal, who left home at the age of 10 to pursue a career in cricket, hit his first IPL half-century, with him and Evin Lewis, who made 27 off 12 balls, both hitting over mid-wicket and straight down the ground with alarming frequency.

Both fell in the space of five balls, to leave Rajasthan - who made five changes, including dropping England's Liam Livingstone - 81-2, but that did not affect them.

Captain Sanju Samson took the anchor role, and allowed Dube to attack and he obliged, including hitting Moeen Ali for successive sixes over mid-wicket.

When Samson fell for 28 his side needed just 20 from 4.2 overs and the game was practically over, and allowed Glenn Phillips to chip in with an eight-ball 14.

It was a bad day for Chennai's overseas pace bowlers with England's Sam Curran going for 55 from his four overs and Australia's Josh Hazlewood 54.

Gaikwad is the latest batter off the Indian production line. Such is their depth, that despite averaging 50.85 in the IPL, he has only played twice for India and that was when a secondary squad toured Sri Lanka this summer, with their regular side in England.

His IPL career has not always been plain sailing, but he, CSK captain MS Dhoni and their head coach Stephen Fleming are now reaping their rewards for their trust and continued faith in the 24-year-old.

As is his norm he started patiently, scoring 20 off 19 balls in the powerplay, and reaching his half-century off 43 balls, before he exploded, moving to 101 not out in just 17 balls.

The right hander, who hit nine fours and five sixes, was strong over the covers and mid-off, showing a natural talent to play in to out, but also latched on to any length to pull and flick over square and mid-wicket with an effortless ease.

One of his sixes went a massive 103m, and he now has the two highest scores in this second phase of the tournament.

A look at the Points Table after Match 47 of the #VIVOIPL ? #RRvCSK pic.twitter.com/WNdMgWRgX1