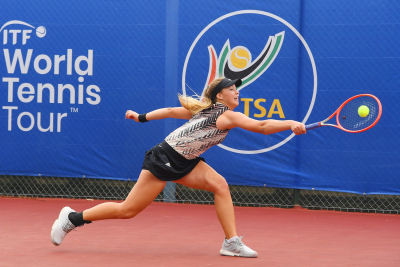 The men and women draws have been whittled down to the final two at the Tuks International, a combined ITF $25,000 World Tennis Tour event at TuksTennis, University of Pretoria.

South African rising star, Zoe Kruger, earned herself an opportunity to win a maiden ITF Pro singles title by breezing into the final of the Tuks International on Saturday.

"I'm very pleased with my performance today, I knew it was going to be a battle and it was just a fight all along, but I just played my own game," said an elated Kruger following her match.

"I am very excited to reach my first final at home and I cannot wait for tomorrow. I am just going to give it my all," added Kruger.

The 19-year-old will face Dutch fifth seed Suzan Lamens for the title on Sunday. Both players will meet for the first time on the tour. The 22-year-old Dutch defeated Russian qualifier Maria Bondarenko 6-3, 7-5 capitalized on four of her eight break points to prevail in one hour and 45 minutes.

In the men's event, Kholo Montsi' impressive run ended at the hands of Rio Noguchi with the Japanese third seed winning their semi-final clash in straight sets.

The South African teen sensation went down 7-5, 6-2 in a match that lasted just over 80 minutes.

After a fiercely contested first set, Montsi, who was playing in an ITF $25,000 World Tennis Tour semi-final for the first time, had a chance to close out the set but couldn't take his opportunity and the Japanese went on to win the set 7-5.

Noguchi took control in the second set and closed out the set 6-2 to book himself a place in the finals.

Noguchi will now face Canadian fourth seed Filip Peliwo, who was handed a final spot after his opponent Michail Pervolarakis of Greece retired injured after one set.

More in this category: « Gaikwad's superb century in vain for Chennai as Rajasthan chase down 190 in style. Watford sack manager Xisco Munoz after poor spell. »
back to top