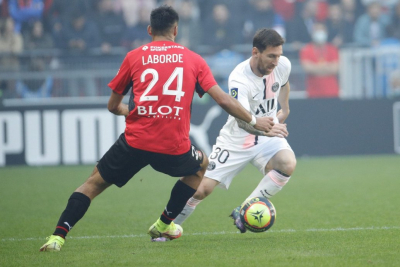 Paris St-Germain's 100% start in Ligue 1 was ended by Rennes as Lionel Messi suffered his first defeat and search for a first league goal continued since arriving at the club.

The hosts scored two quick goals either side of half-time through Gatetan Laborde and Flavien Tait.

Mauricio Pochettino's side did not have a single shot on target, despite Messi, Neymar and Kylian Mbappe all starting.

The defeat is PSG's first in Ligue 1 since April, when they were beaten by last season's eventual champions Lille.

Tait added a second soon after the restart with a sweeping finish into the bottom corner.

After slicing an effort high over the bar in the first half, Mbappe thought he had pulled a goal back for Pochettino's side midway through the second half, only for it to be ruled out for offside by the video assistant referee (VAR).

The Frenchman is now on a run of five games without a goal in all competitions.

PSG were spared further damage when referee Ruddy Buquet reversed his decision to award Rennes a penalty for Achraf Hakimi's foul on Laborde after checking the pitchside monitor.

Neymar missed a volley in the first half and Idrissa Gueye fired wide of the post, but Lionel Messi came closest for PSG when he hit the crossbar from a free-kick.

Bruno Genesio's Rennes side had only won twice in Ligue 1 heading into Sunday's game, but were clinical in front of goal and scored from two of their four shots on target.

The result leaves PSG top of Ligue 1 on 24 points, six points clear of Lens, while Rennes move up to seventh.

Rennes kept their composure in the closing stages as they handed PSG their first away league defeat for eight months.