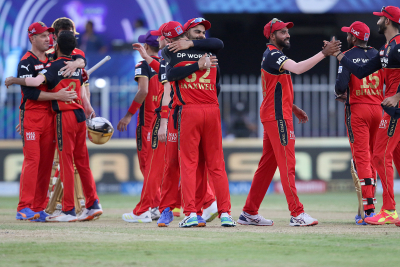 Royal Challengers Bangalore became the third team to qualify for the Indian Premier League play-offs with a six-run win over Punjab Kings.

They made 164-7 with Glenn Maxwell smashing 57 off 33 balls, and Devdutt Padikkal making a patient 40.

In reply, KL Rahul and Mayank Agarwal put on 91 for the first wicket but Punjab struggled as the innings went on to finish 158-6.

Punjab remain fifth, but their play-off hopes are no longer in their own hands.

Scoring with the older, softer ball has been difficult at Sharjah this year, with the average first-innings score just 134, and Bangalore's 164 represented the highest score at the ground this year.

It was built from a solid foundation of 68 between captain Virat Kohli and Padikkal, but they and Dan Christian fell in the space of 12 balls as they slipped to 73-3.

Maxwell, who crashed three fours and four sixes, then put on 73 with AB de Villiers before Mohammed Shami took three wickets in the final over to restrict Bangalore.

Punjab started well, getting to 81-0 at the halfway point, but once Rahul guided to short third the struggle set in and they lost six wickets for 55 runs.

Spinner Yuzvendra Chahal, who was left out of India's T20 World Cup squad, was the pick of the Bangalore bowlers taking 3-29.