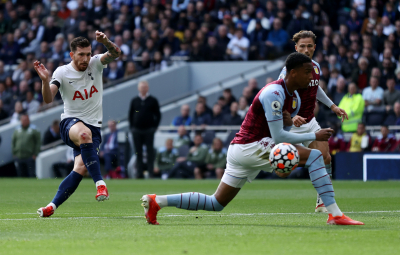 Tottenham Hotspur produced their best league display since the opening-game win over Manchester City to end a run of three straight league defeats with victory over a stubborn Aston Villa.

Humbled at north London rivals Arsenal in the last of that trio of losses, Spurs overcame a ropey start to produce a display that was far from perfect but at least showcased a greater defensive organisation and attacking edge.

Son Heung-min was typically bright, providing two assists, Lucas Moura looked sharp and Harry Kane -fresh from his 20-minute hat-trick against Mura on Thursday - was more involved in the final third than of late.

However, they were still made to work by a Villa side who did not panic after falling behind to Pierre-Emile Hojbjerg's coolly-taken opener midway through the first half.

Their enterprise and endeavour was rewarded with just over 20 minutes to go, with Oli Watkins meeting Danny Ings' superb low cross to net his first goal of the season from close range.

Their joy was short lived, though, with Son speeding past Kortney Hause and providing a superb low ball that was bundled into his own net by Matt Targett under pressure from Moura.

Spurs had numerous opportunities to put the game to bed but failed to convert, the most notable being an Emiliano Martinez save to deny Kane his first league goal of the season.

The England striker has now failed to score in his last six Premier League appearances, which is his longest scoreless streak in the competition since failing to net in his first six games of the 2015-16 campaign.

The win moves Nuno Espirito Santo's side up to eighth on 12 points, two places and points better off than Villa.