Manchester City fight back twice for 2-2 draw at Liverpool. 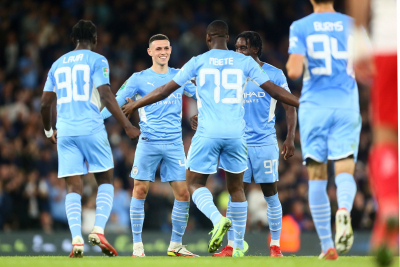 Manchester City twice pegged back Liverpool to earn a thrilling 2-2 draw at Anfield on Sunday.

All four goals came in a stunning second half where Kevin De Bruyne rescued a point for Pep Guardiola's side.

Liverpool took the lead through Sadio Mane before Phil Foden reduced the deficit. Mohamed Salah scored a stunner to put the hosts back ahead before De Bruyne grabbed another equaliser.

The draw sees Liverpool remain in second place with City behind in third.

De Bruyne should have put the visitors ahead 10 minutes before the break but his close-range header went over the bar.

The hosts responded well and Ederson produced a good save to stop Diogo Jota's effort.

Liverpool went ahead after 59 minutes after Salah skipped past Joao Cancelo to set up Mane to finish past the goalkeeper.

Salah restored Liverpool's lead with a stunning solo goal where he jinked past four defenders and slotted the ball over the Ederson.

The champions responded once again five minutes later as De Bruyne's effort deflected in off Joel Matip. Fabinho almost won it late on but Rodri produced a stunning block to keep the score level.