Sundowns thump Swallows to extend lead at the top. 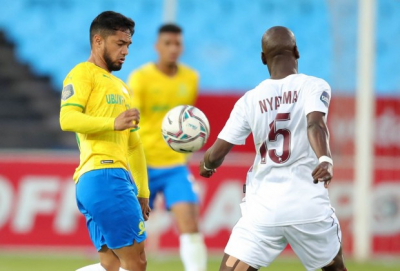 Goals from Pavol Safranko, Neo Maema and Peter Shalulile gave Sundowns a commanding win in the country's capital. Another heavy defeat, this time in the league, leaves the Birds in 14th spot and just three points above the relegation zone.

Shalulile headed into the game in hot form and almost found the opener with two minutes on the clock, but Sanele Tshabalala raced off his line to deny Namibian.

Swallows then took control of proceedings and created a flurry of chances which tested Denis Onyango in the Sundowns goal.

Swallows were made to rue not taking any of a catalogue of chances as Sundowns hit the front before the half-hour mark.

Thabiso Kutumela rattled the woodwork before seeing his follow-up shot superbly cleared off the line by a retreating Wandisile Letlabika, but the Brazilians would score from the resulting corner-kick as Safranko nodded home Lyle Lakay's cross.

Sundowns doubled their lead in the 78th minute following superb link-up play between second-half substitutes Sibusiso Vilakazi and Maema. The aforementioned played a neat pass into the path of his teammate who finished with aplomb.

The Brazilians landed a third goal a minute from time when Peter Shalulile got down in the area to head in a ball from the right and see his side to another win in the Premiership.