SA's rugby teams can look to SA golfers for key to European success. 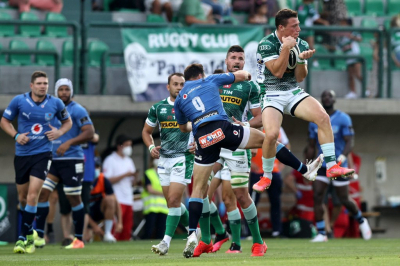 ST ANDREWS, Scotland (4 October 2021) – As the South African rugby teams continue to adapt to the new conditions and new challenges posed by the Vodacom United Rugby Championship and playing in Europe, South Africa's professional golfers could provide some much-needed advice on the matter.

Dean Burmester is one of those, and as he stepped off the Old Course in St Andrews after a brilliant 65 to finish tied seventh in the prestigious Alfred Dunhill Links Championship on Sunday, he suggested that while it looks like a baptism of fire for the South African teams in the Vodacom United Rugby Championship at present, things will change for the better as they get used to the conditions.

"You know, it comes with experience," the two-time European Tour champion said after a bitterly cold day on the St Andrews links on Sunday.

"When I first came over to play in Europe it certainly wasn't a breeze. It was really tough getting used to cold winds and cross winds. The cold and wet over here is very different to what we have back home, and I think it will take some getting used to for the Highveld teams in particular. But you do get used to it. And when you do, it's just a case of knuckling down to it and playing your best. I'm sure they'll start putting in the big hits and scoring some tries soon," he said.

The South African golfers do their best to keep up with the rugby while they're on tour, and Burmester – a sports fanatic – is no exception.

"I sat on Saturday night in my hotel room with my iPad eating my dinner and watching the Springboks beat the All Blacks. I couldn't watch it live because I was playing, and I made sure I didn't know the score so it was cool to watch the game as if it was live."

More in this category: « Former world number one Noami Osaka drops out of top 10 in rankings. Royal AM slammed for giving players cash on the pitch. »
back to top