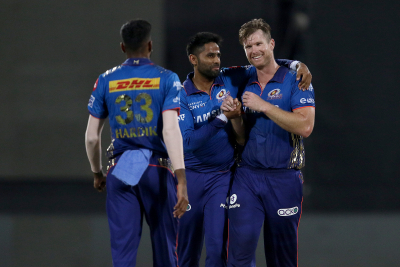 Ishan Kishan hit 50 off 25 as Mumbai reached the target in just 8.2 overs.

The five-time winners will take fourth spot if they beat Sunrisers on Friday and Royals beat Kolkata Knight Riders on Thursday.

Royals drop to seventh in the table and while a top-four spot is not mathematically impossible, their far inferior run-rate all-but-ends their hopes of qualification.

Delhi Capitals, Chennai Super Kings and Royal Challengers Bangalore are all guaranteed a place in the play-offs.

After being put into bat in Sharjah, Royals got off to a flier and reached 21-0 after two overs, before it all went downhill.

Royals - who are still searching for a first IPL Trophy since winning the inaugural competition in 2008 - could not contend with a fired-up Mumbai seam attack led by the impressive Coulter-Nile and Neesham.

Australian Coulter-Nile made the initial breakthrough to dismiss in-form Yashasvi Jaiswal (12 off 9) and also took the wickets of Glenn Phillips - who made just four - and David Miller (15 off 23).

The seamer bowled with discipline and accuracy, and such was the regularity of wickets he barely celebrated when he took his fourth wicket to dismiss tailender Chetan Sakariya for six.

The selection of Neesham paid off instantly for Mumbai as the New Zealand seamer dismissed Royals captain Sanju Samson for just three with his first ball.

Neesham then bowled Shivam Dube for three in the following over and capped off a fine display by dismissing Rahul Tewatia (12 off 20) from the final ball of his spell.

As Royals headed into the final over, former England all-rounder Ravi Bopara said the writing was already on the wall.

Mumbai Indians - the most decorated team in IPL history - had a point to prove having lost their previous three games.

Despite a low total to chase, captain Rohit Sharma took it to the opposition from the first over by hitting 14 off Mustafizur Rahman, including a delightful six straight back down the ground.

Rohit's 13-ball 22 came to an end when he chipped the seamer straight to point, but fellow opener Ishan Kishan continued the onslaught.

Mumbai capitalised on an opportunity to win in quick time and improve their net-run-rate, reaching 48-1 after five overs.

A look at the Points Table after Match 51 of the #VIVOIPL ? #RRvMI pic.twitter.com/VwyvG4FKfP

Kishan hit Sakariya for consecutive sixes in the eighth over and then cleared the boundary again with a six off Mustafizur to hit the winning runs - and reach his 50 - in style.

More in this category: « Siyanda Mwandla finding his sweet spot on Tour. SunBet Challenge first round postponed. »
back to top