The medical magic behind the Vodacom Bulls. 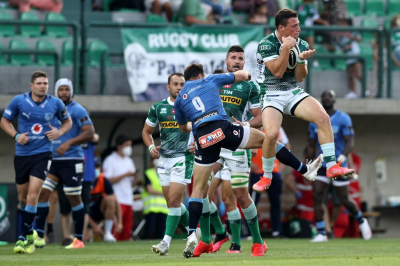 CARDIFF, Wales (6 October 2021) – Moving an entire team of 36 rugby players around the United Kingdom on a four-week Vodacom United Rugby Championship tour during the time of COVID-19 is daunting enough. But keeping them moving, from training sessions to matches to rehab and that whole cycle each week, is where the real challenge lies.

It's a job that quite literally lies in the hands of Vodacom Bulls team physiotherapists Pieter du Plessis and Lance Lemmetjies.

For a decade now Du Plessis, as part of the Vodacom Bulls' top-level medical team that includes Lemmetjies, Dr Herman Rossouw, strength and conditioning coach Andre Volsteedt and sports scientist Yusuf Vahed, has helped to make sure that the literal muscle in this team is kept in peak condition.

And it's a massive operation to ensure that every player is performing at his best physically.

"To give you an idea, our strapping alone that we bring on a tour such as this fills four large cricket kit bags. We basically go through one cricket kit bag of strapping a week. Our recovery and rehab equipment takes up the most space," says Du Plessis.

Du Plessis likens the role the medical teams plays to that of a car mechanic.

"After every match, just like a car, that player needs to be serviced. There is swelling and bleeding to get rid of or musculoskeletal issues to attend to, and you have a week to do that before the next match. I work closely with the team doctor and we have a very good relationship because you need to be able to assess a player and establish whether the pain he's feeling is just a niggle, or whether it's something that will actually impede his role on the field. And every injury and situation is different."

The analogy of a car gives a very good indication of the physical demands placed on the modern rugby player. If you ever thought, sitting at home on your couch, that those tackles don't look as bad as they're made out to be, think again.

"When you do this job, you appreciate what these players' bodies go through every single week. It's like taking a car and crashing into a wall, then reversing it, fixing the damage, and then getting it ready for the next crash into the wall the following week.

"And to keep the team optimal in terms of player welfare as well as the team's success is where the communication between the medical team and the coaches is so important. There are so many variables and team dynamics, and at the Vodacom Bulls we have an incredible relationship between all of us to ensure we manage all of this effectively in the best interests of the player."

The science around rehabilitation is also constantly evolving, and it's something Du Plessis studies intently.

"We're constantly investigating new rehab methods. We're blessed at the Vodacom Bulls in that they support us in this. So, if there is something new that emerges, we're given the support to go and investigate and see whether it can benefit the team."

And yet Du Plessis says the most critical factors in the rehabilitation of rugby players is not as deep or scientific as you might think. It's actually quite obvious.

"Good nutrition and sleep. If you don't get those two elements right, especially on tour, you can forget about recovery. Stretching and all of the other interventions come after this."

Sleep in particular is a huge focus for Du Plessis while on tour.

"People don't realise how important it is for the players to sleep properly in terms of their performance, and how difficult this is when you tour as a team. Firstly, you're not in your own bed, which is a big change. The players share rooms, so their sleep is often interrupted, whether it be from a snoring teammate or even that simple fact that you are not on your own and have no privacy. Some hotels only offer single beds, which for a tall lock is a problem.

So with this in mind, this player needs to go out on Saturday and compete against his opposite number who's been sleeping well at home, eating the food he likes and needs, and is in a great space. It's those one per centers that we talk about that can really be the difference between going into a match well or going into it with the equivalent of a 15-0 backlog. All of these external factors combine to have an effect, and this needs to be managed."

And next week, it starts all over again.

More in this category: « No spectators will be allowed in the league matches - PSL. SRH dent RCB's chance to get top-two finish with upset four run win. »
back to top